Rebecca Horn is one of the most important artists of the second half of the 20th century and early 21st century. This multidisciplinary artist mainly works with installations, performance, cinema, photography and drawings. Her early work (1970s) is rather radical as well as socially and politically loaded. Her famous performances explore her obsession with the imperfect human body and the balance between figure, object and space. In her youth she was marked by a traumatic disease that influenced her first years of artistic activity, when Horn mainly drew on paper due to her physical limitations. In the 1980s she replaced the human body with kinetic installations that offer powerful visual plays through mirrors, lens, lights and music, using elements such as violins, suitcases, batons, ladders, pianos, feather fans, metronomes, small metal hammers, black water basins, spiral drawing machines and large funnels. Her installations are conceived to be staged in specific places of historical and political significance. Sex, desire, mysticism, poetry and music (she collaborates regularly with musician Hayden Chisholm) materialise through works that reveal her incredible scientific and technological skills.

In 2009, Rebecca Horn carried out a joint project with Jannis Kounellis. The project, called Aigüestortes, was an exhibition designed to mark the 40th anniversary of Pelaires Gallery. This project was the result of a unique collaborative work between two top artists of international contemporary art who ended up working very closely after their first encounter at the 1972 Documenta exhibition in Kassel. 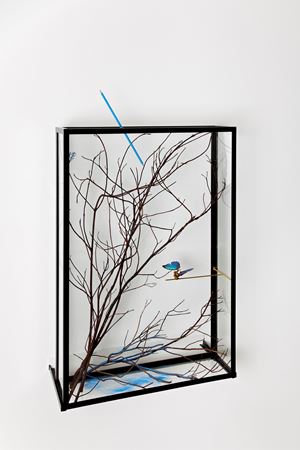 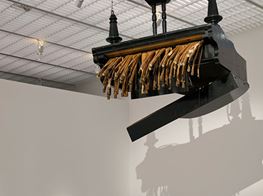 METZ, France; BASEL, Switzerland — The Centre Pompidou-Metz and Museum Tinguely have joined together to present a remarkably diverse and prolific two-part exhibition devoted to the German artist Rebecca Horn. Horn's stimulating body of work, begun in the late 1960s, consists of conceptually based, process-oriented, prosthetic performances... 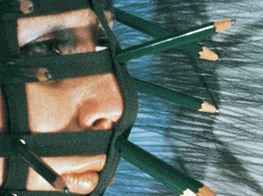 When Rebecca Horn was in art school, she used fiberglass and polyester as sculptural materials. They soon damaged her lungs, forcing her to spend a year in a sanitarium. The months of isolation led to a reappraisal of her sculptural medium. After she was released, she started sculpting own body. 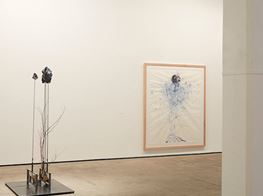 Related Press THE BACKBONE OF REBECCA HORN 15 May 2015, Interview Magazine

If you were to imagine Justine, the titular heroine in the Marquis de Sade's late 18th-century novel (also called The Misfortunes of Virtue ), in a tiger pelt, you would be sharing a poetic vision with celebrated German artist Rebecca Horn. You might also be fantasizing about the late German born-Swiss Surrealist, Méret Elisabeth Oppenheim, to...