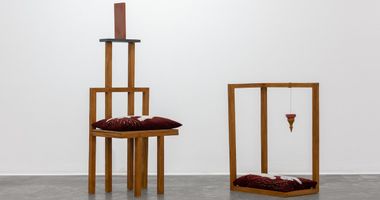 Men and narratives, in their inseparable relationships, define Ana Mazzei's interest. It is from this perspective that her work develops and grows.

For Mazzei, art, architecture and landscapes construct, in themselves, a fiction that connects them, resulting in installations, settings and objects. Some of the works operate on a smaller scale, such as the series of installations arranged on the floor formed by groups of small shapes made of felt, concrete or wood similar to the architectural models of old cities, amphitheaters or monuments. Beyond the formalist exercises, these floor objects invoke unidentified stories that suggest hidden and impenetrable archetypal structures. This dual movement, suggesting and retaining the symbolic value of the objects, is recurrent in her practice.

Her artworks are like pieces and fragments of myths, lives and fictions that are represented in drawings, videos, sculptures and installations. At other times, her works function as observation devices framing this vast repertoire from a specific point of view. Focusing on a widely experimental practice, the artist appropriates different sensorial materials, such as felt and concrete, connecting to the environments in which she works.

Ana Mazzei (born in 1979, São Paulo, Brazil) completed a BFA in Visual Arts at the Fundação Armando Alvares Penteado (FAAP) in 2006 and a MA in Visual Poetics at UNICAMP in 2010.

She lives and works in São Paulo, Brazil.

Ana Mazzei doesn't create works so much as she makes stages out of them.

Sign up to be notified when new artworks and exhibitions by Ana Mazzei are added to Ocula.
Sign Up Login