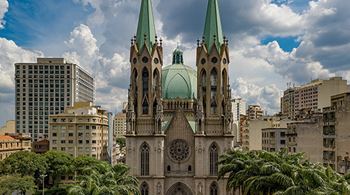 Brazil's financial hub of São Paulo is home to a dynamic arts scene, with galleries, museums, and art festivals aplenty. The second oldest biennial in the world after the Venice Biennale, Bienal de São Paulo is a staple in the city's annual programme alongside the art fair, SP-Arte, founded in 2005. Further to its thriving gallery community, the Lina Bo Bardi-designed Museu de Arte de São Paulo (MASP) guarantees access to some of the best of art from Brazil and beyond.

The Bienal de São Paulo takes place each year in the Ciccillo Matarazzo Pavilion, originally designed by Oscar Niemeyer in 1957. Since its founding in 1951, the biennial has remained one of the most important large-scale art exhibitions in Brazil and provides a platform for year-round activities at its pavilion, including lectures, seminars, and training sessions for teachers. Likewise, MASP offers an important programme of international and Brazilian art from its a striking modernist building in glass and concrete, elevated by two monumental red frames. MASP was relocated to Avenida Paulista in 1968 from its original location downtown, and contains around 8,000 works, primarily of the post-war period.

A number of cultural institutions have joined MASP on Avenida Paulista in recent years, owing to a decision in 2015 by the city's authorities to render the avenue car-free on Sundays, thereby increasing accessibility. One such institution is the Moreira Salles Institute (IMS), which boasts free admission to its seven-story gallery, which opened in 2017. A gift to the city from the foundation of banker and art collector Walter Moreira Salles, IMS includes a photography library, cinema, and lecture halls, with major exhibitions including Richard Serra's first public sculpture in Latin America, Echo (2019), and Irving Penn: Centennial, a travelling retrospective to mark the centenary of the photographer's birth, first organised by The Metropolitan Museum of Art in New York in 2017.

The Fernanda Feitosa-founded SP-Arte describes itself as 'Brazil's main platform for arts dissemination and commerce', attracting key international and Brazilian galleries, including David Zwirner, Galeria Luisa Strina, Galeria Nara Roesler, Lisson Gallery, Fortes d'Aloia & Gabriel, and neugerriemschneider, of the 124 that participated in its April 2019 edition. An established community of collectors in Brazil supports the regional art scene, with São Paulo's galleries catering to this community. Mainstays include Luciana Brito Galeria, housed in a Rino Levi-designed villa from 1958, surrounded by lush tropical vegetation—an accompaniment to many of the city's galleries, including Mendes Wood DM, which was founded in 2010 by Felipe Dmab and has branches in Brussels and New York. The gallery aims to provide a 'kunsthalle' structure in the city, by bringing international artists such as Alvaro Barrington, Francesca Woodman, Neïl Beloufa, Michael Dean, Otobong Nkanga, and Kishio Suga. A ten-minute drive away, near the Italian neighbourhood of Bela Vista, Galeria Jaqueline Martins fosters 'research-oriented conceptualist practices characterized by critical, even subversive, approaches'. A host of other galleries have cropped up in the city over the last two decades, including the not-for-profit Galeria Vermelho, which presents works by artists and theoreticians, fostering dialogue around the field of performance, while Choque Cultural presents subversive exhibitions around 'underground culture, showing pop, outsider & young art in original style' since 2004. Choque Cultural is also an established publisher, creating screen print editions in collaboration with artists.

Just over a 15-minute walk away from Choque Cultural, the Instituto Tomie Ohtake provides the opportunity to view works by Japanese-Brazilian informal abstractionist Tomie Ohtake, who arrived in Brazil from Kyoto in 1936, and became an important figure in São Paulo's art scene from the 1950s right up until her death in 2015. The institute provides a platform to understand Ohtake's practice within artistic developments of the last six decades and earlier, and has staged exhibitions by artists including Louise Bourgeois, Josef Albers, Yayoi Kusama, and more.