Bridget Riley is a British artist known as one of the early proponents of the Op art movement of the 1960s.

Her earliest works were semi-Impressionist figure paintings, followed, from around 1958, by pointillist landscapes. During the late 1950s and early 1960s Riley took up several teaching positions in the U.K, including the Loughborough University School of the Arts, Hornsey College of Art and Croydon School of Art. In 1960 she also entered the employ of the J. Walter Thompson advertising agency.

In the 1960s, Riley began to develop her trademark style: abstract geometric patterns in black and white, composed of curved parallel lines and dots, checkers or triangles arranged in disorienting grid-like or spiral patterns. These combinations form impossible shapes that appear to move, pulsate and undulate before the viewer's eyes, producing sensations of falling and wave-like motion. In 1961, due to increased scale and a need to retain precision, she began working with assistants to produce her work. Her first solo show was in 1962 at Victor Musgrave's, Gallery One.

Riley abandoned teaching and advertising in the mid-1960s as her art practice expanded. The 1965 Museum of Modern Art exhibition, The Responsive Eye, drew international attention to the work of Riley and other Op artists. Riley represented Op art to the world alongside artists such as Yaacov Agam, Richard Anuszkiewicz, Frank Stella and Op art's earliest proponent, Victor Vasarely. Her work Current (1964), made of synthetic polymer paint on exhibition board, fronted the exhibition catalogue.

Having set form free from its descriptive role through her black and white works, in 1967 Riley turned to colour. It was a cautious foray at first, as a common perception of colour is that it does not disrupt stable elements in as crisp and orderly a manner as black and white. As exemplified in the canvas Cataract 3 (1967) she began using consistent, stable forms such as the wavy line, and relying on the visual effect of groups of coloured lines (usually faint) in the spaces between to create the desired sensation of movement.

The response to colour became a more central focus of Riley's works in the 1970s. The works from this period are emotional yet peaceful. In the acrylic painting Zing 1 (1971), she introduced the theme of the colour twist, where twisted vertical stripes create horizontal bands. In these twists, the colours are still muted, and grey is often included among them. Riley also adopted the principle of colour induction: blending one colour into another. These elements led to a long series of vertical stripe paintings. Toward the mid-1970s, her curvilinear forms, both in horizontal and vertical formats, became more prominent. Only her works after 1978, however, feature more than three colours.

A visit to Egypt in 1979–80 left Riley inspired by the colours of Egyptian art. In the 'Ka' and 'Ra' series she worked the colours into a composition of close, thin vertical lines. These images shimmer with intensity while marking the expulsion of a sense of order or progression in her work. She also worked outside the studio in this decade, the most notable project being the murals for Royal Liverpool Hospital (1983), which utilised bands of blue, white, pink and yellow to create a soft and relaxing atmosphere.

Between the mid-1980s and mid-1990s, Riley produced her most colourful and dazzling paintings. Works such as the screenprint To Midsummer (1989) and the oil painting From Here (1994) incorporated a diagonal element that cut from left to right across the verticals, creating an alternating rhythm through the contrast of different vivid colours. This disruptive element softened in the late 1990s and early 2000s to something more fluid and curvilinear that broke out of the square format.

Riley has also revisited her horizontal and vertical line formats with new colour arrangements. She continues to develop, exploring new motifs such as the tessellating arrow-forms of the 'Bagatelle' (2015) and 'Sonnet' (2016) series of screen prints. 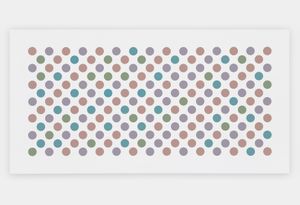 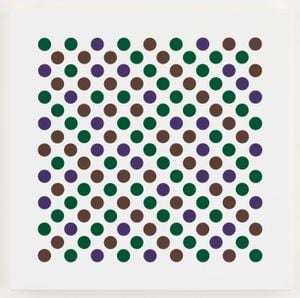 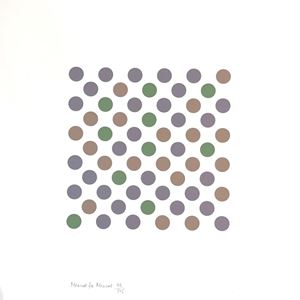 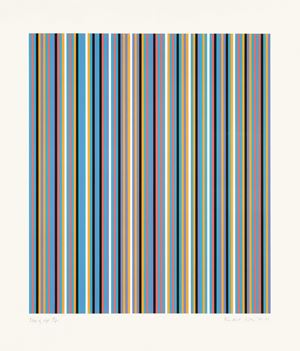 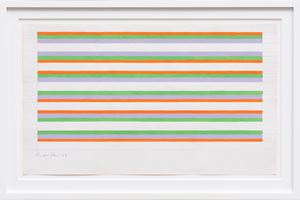 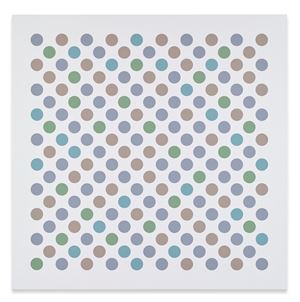 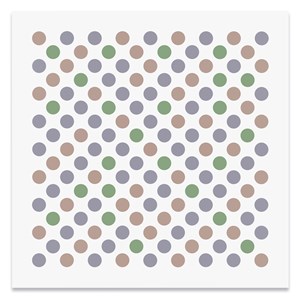 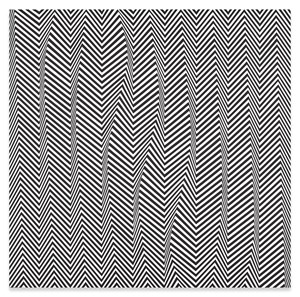 Founded in São Paulo in 1989, [Galeria Nara Roesler][0] is one of the most established contemporary art galleries in Brazil. The gallery has played an important role in establishing a dialogue between

Even for those familiar with modernism's history in the latter half of the 20th century, the story of the life of the British painter Bridget Riley and the development of her work is not very well kno

Read More
Related Press The Making of An Artist: How Bridget Riley Became the Queen of Op Art 1 September 2019, Elephant

Bridget Riley is a name so familiar that it seems baffling nobody has previously written in-depth about her early years, and how she rose to such a stellar place in our cultural lexicon. A new book fr

The work of Bridget Riley (b. 1931) has always created something barely there, disappearing even as you glimpse it. At the preview for her new show Recent Paintings 2014–2017 at David Zwirner in Mayf

Be among the first to know when new artworks and exhibitions by Bridget Riley are added to Ocula.
Sign UpLogin