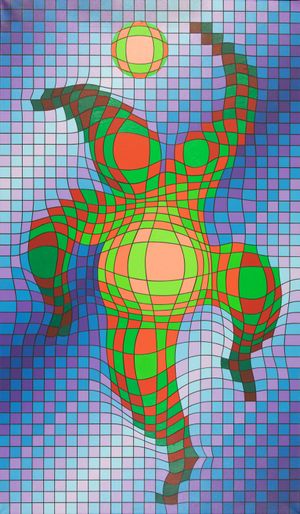 Hungarian-French painter and printmaker Victor Vasarely is often hailed as the grandfather of Op art. The artist is renowned for creating artwork that produces the illusion of movement through the precise arrangement of geometric shapes in patterns of contrasting tones, either in black and white or vivid colour.

Vasarely was born in Pécs, Hungary, growing up in Piešt'any, in what is now Slovakia, and Budapest. Showing more interest in science rather than art during his childhood, Vasarely initially began his studies in medicine, but left after two years to pursue traditional academic painting. Shortly thereafter, Vasarely enrolled at the Műhely, a private art academy led by Sàndor Bortynik, an avantgarde artist and advocate of the Bauhaus.

There Vasarely was exposed to the teachings of the original Bauhaus artists—Wassily Kandinsky, László Moholy-Nagy, and Paul Klee—and their formal language of abstract and geometrical arrangement. He was also heavily influenced by the work of the Russian Constructivists and Suprematists to produce kinetic art, art that moved or gave the illusion of doing so.

In the 1930s, Vasarely moved to Paris to work in advertising as a graphic designer. During this early period, Vasarely experimented with the scientific principles of colour and optics, producing prints and paintings that were abstractions of real subjects. In 1937, he produced Zebra, a black-and-white image of two zebras defined only by their white stripes, which is considered to be one of the first pieces of Op art.

In 1944, he co-founded the Denise René Gallery with art dealer Denise René, where he held his first significant exhibition of his graphic works and drawings. It was following the Second World War, during which Vasarely had spent some years living in the Lot region in southwest France, that Vasarely transitioned to his signature style, producing fully abstract works based purely on the organisation of geometric shapes and the illusion of movement.

The hallmark of Victor Vasarely's 1950s style is a visually intense arrangement of contrasting hard-edged geometric shapes in black and white, set in complex orderly patterns. Not only does this style give the illusion of space and depth on an abstract two-dimensional surface, but it also contains a sense of dynamic movement.

In 1955, Vasarely exhibited in Le Mouvement, a landmark exhibition at the Denise René Gallery that also the featured work of Alexander Calder, Marcel Duchamp, Jesús Rafael Soto, and Jean Tinguely, and is credited with popularising kinetic art. There Vasarely demonstrated his scientific theories of art-making, which he also published in his Yellow Manifesto in the same year.

Vasarely began to work with colour more in the 1960s. It was in this decade that he fully realised his alphabet plastique (plastic alphabet), a basic set of geometric shapes and colours that could be arranged in potentially endless configurations. This compositional system was used to create the influential 'Planetary Folklore' series, through which Vasarely sought to generate visual effects that could be universally understood. The systematicity of Vasarely's plastic alphabet, which could be easily reproduced by studio assistants, also laid the foundation for serial art, a movement that involved the composition of artworks through strictly defined, modular principles.

The 1960s also saw Vasarely's arrival on the international art scene. At the influential Op art exhibition at the Museum of Modern Art in 1965, The Responsive Eye, Vasarely exhibited alongside other younger Op artists such as Bridget Riley and Yaacov Agam. As well as bringing international fame and demand for Vasarely's works, the exhibition led to the appropriation of Op art by fashion, advertising, and popular graphics. Op art was well-suited to these industries as a style able to lend itself to mass production and hold broad universal appeal, requiring only the eye, rather than prior knowledge, to be appreciated.

Victor Vasarely exhibited in solo and group exhibitions both throughout his lifetime and after. In 1970, he established the Vasarely Foundation and the first museum dedicated to his work in Gordes, France, followed by a second outpost of the Vasarely Foundation in Aix-en-Provence in 1976. There are two museums dedicated to his work in Hungary, located in his hometown of Pécs and in Budapest. 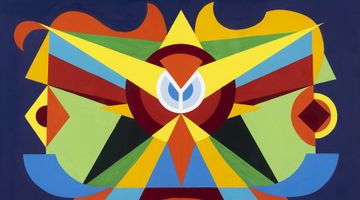