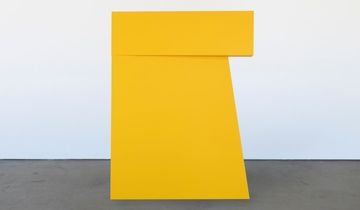 After going unnoticed for decades, the crisp, Minimalist geometric abstractions of pioneering Cuban-American painter Carmen Herrera have gained increasing recognition as a meeting-point of the approaches of a range of Latin American, European, and North American 20th-century movements.

Herrera was born in Havana, Cuba, in 1915, and grew up amidst socio-political unrest. Her early education was carried out between Cuba and Paris, first in art and then in architecture. After marrying an American teacher, Jesse Loewenthal, Herrera moved to New York in 1939. Retaining her passion for art, she studied at The Art Students League from 1942 to 1943.

Between 1948 and 1953, Carmen Herrera lived in Paris. In these formative years as an artist, she moved in the circles of Simone de Beauvoir, Jean-Paul Sartre, and the various international regulars exhibiting at the Salon des Réalités Nouvelles, among them Theo van Doesburg, Kazimir Malevich, and the early Russian Suprematists.

In Paris, Herrera refined a style of pure, hard-edged geometric abstraction in which ovals, triangles, rectangles, and semi-circles overlap and interlock. These strict, disciplined, highly architectural compositions, with a palette limited to two or three colours, anticipated the Minimalism trend that was to emerge a decade later.

After returning to New York with her husband, Carmen Herrera continued to develop an increasingly Minimalist style in which crisp lines glide along planes of contrasting colour. While her exploration of colour was in tune with contemporaneous American artists like Leon Polk Smith, it also found harmony with Latin American groups such as the Brazilian Concretists and the Venezuelan Los Disidentes.

A seminal series for Carmen Herrera, 'Blanco y Verde' (1959–1971), reflects the artist's quest for what she calls 'the simplest of pictorial resolutions'. Each of the 14 works in the series generates a tension in which the points of thin coloured triangles meet against a white backdrop. The paintings demonstrate a fascination with line and colour that Herrera has sustained in her work for the better part of a century.

Unlike celebrated male contemporaries of geometric abstraction such as Barnett Newman and Ellsworth Kelly, Herrera worked for decades with little recognition. As she intimated in an interview for the Guardian in 2016, navigating the complex male-dominated artworld as a female avantgardist proved difficult, and broad commercial and institutional acceptance proved elusive. Herrera did not sell her first paintings until 2004.

Carmen Herrera's paintings, drawings, and sculptures found increasing acclaim in the 21st century, however, and are now located in major public collections including The Museum of Modern Art, New York, and Museum Pfalzgalerie Kaiserslautern, Germany. The artist continues to paint in New York with the aid of an assistant. The 2015 Carmen Herrera documentary, The 100 Years Show, offered further attention to the artist's long and until more recently, under appreciated career.