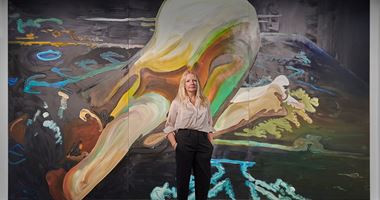 Born in 1972 in Hampshire, Clare Woods studied sculpture at Bath College of Art prior to receiving her MFA from Goldsmith's College, London in 1999. She is a sculptor-turned-painter and is also known for her prints and works on paper.

Clare Woods' paintings are defined by anthropomorphic, curving strokes of spatially impacting colour that depict abstract landscapes and more recently, the human figure. These images are rendered from photographic sources such as newspaper clippings, magazines, and her own photographs, which she traces onto huge aluminium panels before applying configurations of glossy enamel, acrylic, or oil paint. The image is painted flat on the studio floor or on trestles, allowing her movement and pressure upon the brush to manipulate the paint. Her skillful layering of paint and spatial manipulation of tonal contrast possess a distinctly sculptural dimension. In an interview with Florence Hallett for The Arts Desk in 2011, Woods stated, 'it's not about the image, it's more about the construction of the paint.'

Before 2011, Clare Woods focused primarily on landscape, exploring the genre's position in art history—particularly British landscape painting—along with the relationship of the body to the landscape. For her 2006 solo exhibition at Chisenhale Gallery, the artist presented three immense panels, 9 feet high and between 24 and 36 feet long; derived from photographs taken by the artist of sites of rural folk traditions and supernaturally charged places. Woods subverts the traditional landscape format that is defined by the horizon line, by focusing on overlooked patches of the environment, from bushy undergrowth to pools of water. There is an underlying mystery in these compositions, as seen in Daddy Witch (2008), part of the Arts Council Collection, which captures a moonlit pool of water interrupted by reflections of surrounding thicket.

The visceral, unsettling mood conveyed in such landscape paintings by Woods also transfers to her more recent works of the human figure. The artist began these psychologically charged compositions after a period of illness between 2011 and 2013. After this period, she began painting from cadavers, and became interested in artists such as Alberto Giacometti and Francis Bacon. Here, Woods continues featuring the compositional tension between solid and hollow space; foreground and background. In Victim of Geography, her 2017 solo exhibition at Dundee Contemporary Arts, she presented bodies laid bare across the picture—or in remote landscapes—vulnerable in their solitude and exposure.

Clare Woods lives and works in Herefordshire on the Welsh border. In 2012, she was commissioned by the Contemporary Art Society to create a permanent ceramic tiled mural for the Olympic Park in London. Collections with her work include: the British Council, London; Arken Museum of Modern Art, Denmark; Government Art Collection, London; Southampton City Art Gallery, London; Arts Council Collection, London. Woods' solo exhibitions include: Reality Dimmed at Mead Gallery, University of Warwick, Coventry (2018); The Dark Matter, Southampton City Gallery (2012); The Unquiet Head, The Hepworth Wakefield (2011). In 2016, she published a monograph covering 25 years of her practice, titled Strange Meetings.

In this edited transcript of a talk held at Simon Lee Gallery on the occasion of Doublethink, the artist's first solo show in London in ten years, Clare Woods discusses the latest shifts in her practice with Jennifer Higgie.

Sign up to be notified when new artworks and exhibitions by Clare Woods are added to Ocula.
Sign UpLogin