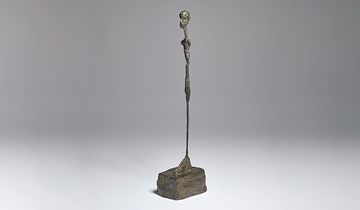 Alberto Giacometti was a Swiss sculptor, painter, draughtsman, and printmaker. His distinctive style and close alignment with the significant art historical and philosophical movements of the time made him one of the most important sculptors of the 20th century. Throughout his life, he was preoccupied with the quest of most accurately representing reality as it is experienced by the individual, drawing on themes of vision, matter, and meaning.

Giacometti was born in Borgonovo, Switzerland, as the son of a post-Impressionist painter. Encouraged by his family, he moved to Paris in 1922, where he took classes under Antoine Bourdelle, himself a student of Auguste Rodin. During this period he was exposed to the avantgarde currents of Cubism and Surrealism. His abstracted, dream-like sculpture Gazing Head (1928–1929) exemplified his interest in the representation of inner experiences, such as dreams and memories, and resulted in his induction into the Surrealist inner circle.

From 1935, Giacometti became increasingly preoccupied with figurative representation. Expelled from the Surrealist group, he embarked on a range of sculptural experimentations, attempting to synthesise reality into a singular, essential form. He developed three motifs—the walking man, the standing female nude, and the bust—in this fragile, attenuated style.

Giacometti produced major work that drew him international acclaim following World War II. Tall Figure and The Walking Man (both 1947) are towering, slender figures whose size and unfinished surfaces place them in the viewer's space while remaining in an inaccessible, ephemeral realm. Such thin figures, bound to weighty pedestals, were seized upon by proponents of Existentialist thought as encapsulating the alienation of post-war Europe.

In 1953, Giacometti turned away from his thin figures to a greater concern for lifelike accuracy. In 1956, he produced his 'Woman of Venice' works for the French Pavilion at the Venice Biennale. With an increased corporeality, the 15 female nudes acted as a summary of his stylistic progression to date. The artist's final years were studded with retrospectives and accolades. He continued to work on both sculpture and painting, largely producing portraits and busts of his close acquaintances.

Giacometti first exhibited his sculptures at Salon des Tuileries in Paris, 1927. His first solo exhibition was at Galerie Pierre Colle, Paris (1932), and his first solo exhibition in the United States was at the Julien Levy Gallery, New York (1935). His work was exhibited in retrospectives at the Arts Council Gallery, London, and the Solomon R. Guggenheim Museum, New York, in 1955, and at the Kunsthalle Bern, Switzerland, in 1956.

Giacometti was awarded the Carnegie Prize in Sculpture in 1961, and the Grand Prize for Sculpture at the Venice Biennale in 1962. In 1965, major exhibitions of his work were held by Tate London, The Museum of Modern Art, New York, and the Louisiana Museum of Modern Art, Humlebaek. In the same year, he was honoured with the Grand Prix National des Arts by the French government. He died of heart complications in 1966.

The sum was boosted by divorcees divesting themselves of works in the Macklowe Collection and big moves from the crypto community.

The life and art of Alberto Giacometti have received plenty of attention in 2017.

Giacometti's reputation as one of the 20th century's greatest and most celebrated artists is unassailable. Since his death in 1966, exhibitions of his work around the world have ensured the continuing

Read More Related Press On the edge of madness: the terrors and genius of Alberto Giacometti 24 April 2017, The Guardian

He drank with Sartre, mocked Picasso and took silent walks with Beckett – but his work was going nowhere until a vision on Boulevard Montparnasse left him trembling.