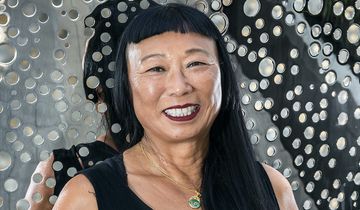 Drawing from the philosophies of Taoism and Buddhism, Australian artist Lindy Lee examines the complex ideas surrounding the self and its relationship with nature and the cosmos. Employing the ideas of chance and spontaneity, she creates a galaxy of imagery that emanates philosophical meditations on nature and life.

Moon in a Dew Drop (2 October 2020–28 February 2021), a major retrospective exhibition of Lindy Lee's work, was organised by Museum of Contemporary Art Australia (MCA). In her conversation with Elizabeth Ann Macgregor, published in Ocula Magazine in partnership with MCA Australia, the artist discussed the influence of Buddhist philosophies on her practice, which considers the self as 'the accumulation of all of history; of everything in this individual moment.'

Lindy Lee studied at the Chelsea College of Art & Design, London, and Sydney College of the Arts in the 1980s. She is a former chairperson and board member of 4A Centre for Contemporary Asian Art, an independent nonprofit art organisation in Sydney committed to encouraging conversation between artists throughout Australia and Asia while supporting Asian-Australian art.

Ocula News National Gallery of Australia Commissions Its Most Expensive Work Ever Canberra, 23 September 2021 Lindy Lee described her sculpture as 'a dance between something that is solid and something that is just drifting off into stardust.'