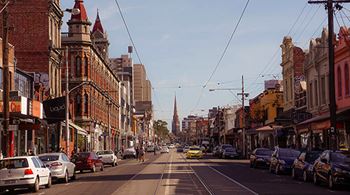 Melbourne is the capital of Victoria, and is widely regarded as the cultural hub of Australia. It is a city rich in both contemporary and historical architecture, situated on the Yarra River.

Hosting a population of nearly 5 million, the Economist Intelligence Unit's Global Liveability Index rated Melbourne as the world's most liveable city for seven years in a row, from 2011 through 2017, based on the city's investment in infrastructure, healthcare, and education. Traditional owners of the land identify as the Boon Wurrung and Woiwurrung (Wurundjeri) peoples of the Kulin Nation.

The National Gallery of Victoria (NGV) is one of the country's major institutions and includes the NGV International and NGV Australia. In 2017 the NGV launched the inaugural NGV Triennial, featuring the work of more than 100 artists and designers from 32 countries.

In close proximity to the NGV is the Australian Centre for Contemporary Art (ACCA). Founded in 1983, ACCA is one of the country's most established non-collecting art spaces and is housed in a building spectacularly designed by Wood Marsh Architecture. A hop, skip, and a jump away is Buxton Contemporary, launched in 2018 with a major gift from the art collector Michael Buxton to the University of Melbourne, where the institution is located. Also nearby is a slew of engaging and diverse spaces such as the Australia Centre for the Moving Image (ACMI), Melbourne Museum, Koorie Heritage Trust, Centre for Contemporary Photography, and Artbank.

Gertrude Contemporary can be found in Preston South. Recently moved from its original Gertrude Street location in Fitzroy, Gertrude Contemporary was founded in 1985 and has a contemporary art exhibition programme alongside a studio programme, with critical attention given to independent practices. Further out from the city centre is the Heide Museum of Modern Art in Bulleen. Established in 1934, today it houses one of Australia's most established collections of modernist works alongside a growing contemporary collection and sculpture garden.

Key commercial art spaces in Melbourne include Station Gallery, Anna Schwartz Gallery, ARC ONE Gallery, Neon Parc, Tolarno Galleries, Sarah Scout Presents, Niagara Galleries, and THIS IS NO FANTASY + dianne tanzer gallery. The next iteration of Melbourne Art Fair (MAF) will be in 2020.

Significant independent and artist-run spaces include Bus Projects, SEVENTH Gallery, BLINDSIDE, and Blak Dot Gallery, the latter of which presents a rigorous programme that prioritises the voices, politics, and material practices of indigenous artists.

Monash University Museum of Art (MUMA) is housed at Monash University's Caulfield Campus and presents an engaging programme of contemporary art exhibitions. Bundoora Homestead Art Centre is another critical space housing an excellent exhibition programme outside of the city centre in a heritage-listed building.

Major festivals and other temporary staged programmes include MPavilion, an annual architectural commission located in the Queen Victoria Gardens. Each year in spring and summer the architectural structure is activated through a range of programmes from across popular and cultural discourse. This year the commission is undertaken by Glen Murcutt AO, and past iterations have included Rem Koolhaas and David Gianotten of OMA, Bijoy Jain of Studio Mumbai, and Amanda Levete of AL_A.

The other major festival of note in Melbourne is Next Wave Festival, which provides a critical platform for emerging artists, producers, and curators in Australia to develop their work and ideas for display and dissemination in public space.

View Map
THIS IS NO FANTASY Melbourne
Tolarno Galleries Melbourne