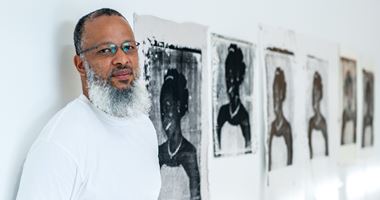 Based in New York, Meleko Mokgosi is a Botswanan contemporary artist and educator. His projects subvert and challenge colonial and post-colonial frameworks in order to offer more nuanced narratives of southern Africa's history and present.

Meleko Mokgosi was raised by his mother and grandmother in Botswana before moving to the United States. He received a BA from Williams College in Massachusetts in 2007 and participated in the Whitney Museum of American Art's Independent Study Program in the same year. He later graduated with an MFA from University of California, Los Angeles' Interdisciplinary Studio programme in 2011.

Mokgosi's visual practice can be broadly split into figurative and text-based paintings. Projects such as 'Wall of Casbah' (2009–2014), and 'Modern Art: The Root of African Savages' (2012–2016) take a textual approach. For these works Mokgosi reproduced existing museum texts on canvas, adding long-form annotations that dissect the inherent cultural biases and persisting colonial power dynamics that lie behind their assumed educational neutrality.

Meleko Mokgosi's key overarching projects 'Pax Afrikaner' (2008–2011), and 'Pax Kaffraria' (2010–2014), are predominantly figurative. Drawing visually from the languages of European history painting and cinematic imagery, amongst others, these works bring together a range of images, tropes, and symbols to question aspects of national identity, colonial history and legacy, and post-colonial perspectives within southern Africa. Meleko Mokgosi frequently incorporates Setswana text into his paintings—an approach, he discusses in Ocula Magazine, that 'creates the conditions of de-centring viewers who do not know the language, and therefore points to the asymmetrical nature of globalisation, which always tilts in favour of the Western viewer.'

The eight-chapter project 'Democratic Intuition' (2013–2019) is one of Mokgosi's longest-running series. For this series, across a wide range of oil paintings and sculptures, Mokgosi examined the complex contradictions of democracy within the lived experience of individuals in southern Africa. Each chapter was exhibited at a gallery or institution, including Institute of Contemporary Art / Boston (Exordium, 2015) and Baltimore Museum of Art (Acts of Resistance, 2018).

Alongside his artistic practice, Meleko Mokgosi influences a new generation of artists as a teacher. In tandem with Meleko Mokogosi's Yale School of Art associate professorship, which began in 2019, the artist is co-founder and co-director of The Interdisciplinary Art and Theory Program, in New York: a programme that seeks to facilitate the investigation of various art-related epistemological frameworks.

Ocula News Art Basel is Back, Dealers Say, With Some Caveats Basel, 27 September 2021

Meleko Mokgosi reflects on his ongoing project, Democratic Intuition, within the development of his practice.

Mokgosi is as interested in the discourse around the figures in his paintings as in their representation — not that the two could ever exist separately.

Be among the first to know when new artworks and exhibitions by Meleko Mokgosi are added to Ocula.
Sign UpLogin