Gagosian is pleased to present Meleko Mokgosi's first solo exhibition in the United Kingdom and Europe, drawn from his grand project Democratic Intuition (2014–2019).

In works of sweeping scale and scope, Mokgosi combines history painting with cinematic montage, bringing together elements of religious iconography, advertising, and political propaganda from southern Africa and the United States to produce a layering of imagery both familiar and unfamiliar. Reconceptualising the intersection of art history, postcolonial nationhood, and democracy within an interdisciplinary critical framework, Mokgosi seeks to redress the many ways in which Black subjects have become unattributed objects of empire and institution.

Democratic Intuition is an eight-part epic that includes multi-panel depictions of southern African life and folklore; its title is a nod to Gayatri Spivak's theory that the functioning of democracy is dependent upon accessible education. Mokgosi engages this concept and its internal contradictions through compelling genre scenes—often involving prominent public figures—that jump-cut between the confines of manual work, the freedoms of intellectual enterprise, and their ties to gender and race. A parade of finely drawn characters emerges out of raw canvas backgrounds, portraying the asymmetries of power that underscore traditional divisions of labor.

One chapter in the series, 'Bread, Butter, and Power' (2018), is an elaborate twenty-one-panel panoramic painting that abounds with overt references to recent histories, as well as diverse associations brought together imaginatively to make a conceptual point. In one panel, uniformed schoolgirls, painted in meticulous detail, till a field of soil rendered in broad abstract strokes; in another, a group of elderly South African military veterans in uniform are gathered, two women seated at the front, as if for a reunion photograph; in a third, two women in period dress embrace in an imagined domestic tableau that contains, among other visual cues, a portrait of a defiant young Harriet Tubman, dressed in the black, green, and red of the Pan-African standard; a self-portrait by Cameroonian photographer Samuel Fosso in the guise of Black radical Angela Davis; and Mokgosi's own protest poster in ANC colours, which refers to the people's battle cry following the infamous Uitenhage massacre in 1985: THEY WILL NEVER KILL US ALL.

In another chapter titled Objects of Desire, individual small paintings of Afrocentric beauty advertisements, Paleolithic cave paintings, and contemporary African objects are grouped together, dispensing with established representational hierarchies. Together with these images are text paintings in both English and Setswana, in which lines from museum wall labels, poems, and dinaane (oral histories) are accompanied by Mokgosi's own critical marginalia. His annotations confront the erasure of African languages by racist policies under apartheid and reclaim these varied mother tongues. Key references for this chapter were the Museum of Modern Art's controversial exhibitions "Primitivism" in Twentieth Century Art: Affinity of the Tribal and the Modern (1984–1985) and Objects of Desire: The Modern Still Life (1997), both notorious for framing historical African artworks as anonymous sources for early European modernism.

Key chapters of Democratic Intuition were brought together in a major exhibition at The School in Kinderhook, New York, during 2019–2020. A catalogue documenting the entire Democratic Intuition project will be copublished by Jack Shainman Gallery and Pacific Editions at the time of the London exhibition. During the exhibition, gagosian.com will host a curriculum and a series of online international seminars organised in collaboration with the artist. 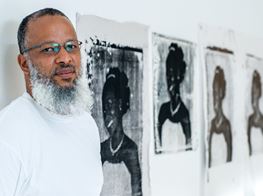 Meleko Mokgosi reflects on his ongoing project, Democratic Intuition, within the development of his practice.

Sign up to be among the first to know when new exhibitions by Meleko Mokgosi or at Gagosian open.