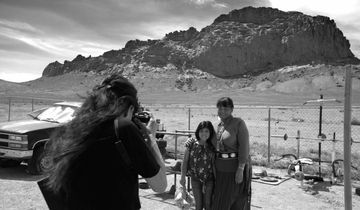 Iranian artist Shirin Neshat is renowned for her photography, video installations, and films that explore the relationship between individual freedoms and society, particularly in relation to Muslim women in the Middle East. She is the recipient of the Golden Lion Award at the Venice Biennale in 1999 and the Silver Lion Award for best director at the Venice Film Festival in 2009.

Born in Qazvin, Iran, Neshat moved to California in 1975 and started her studies at the University of California, Berkeley. The Islamic Revolution of 1979 and subsequent Iran-Iraq war prevented her from returning to Iran until 1990, when she was shocked to discover the drastic changes that had occurred during her absence.

These included the mandate that women wear the chador, the traditional Islamic veil. Though Neshat had made little art since her graduation in 1983, she returned to the U.S. from her visit to Iran to create her first piece of mature work, 'Women of Allah' (1993–1997).

The instruction that women wear the chador by Islamic law provided the central focus for Shirin Neshat's first photographic series 'Women of Allah' (1993–1997). In these black-and-white photographs, Neshat explores femininity in relation to Islamic fundamentalism through self-portraits. The artist's body is covered in a chador, showing only her hands, face, and feet, which are covered in Farsi poetry to signal the strength of individual thought.

In 1998, Neshat created her video installation Turbulent (1998), which won her the Golden Lion Award, the First International Prize, at the 48th Venice Biennale in 1999. The two-channel video depicts the contrasting freedoms of expression given to Iranian men and women through two scenes. The first shows a male singer standing on a stage singing a love song written by 13th-century poet Rumi, at the end of which he receives a round of applause; the second shows a woman gasping and warbling to an empty theatre, receiving, unlike the man, no applause.

Turbulent is the first in a trilogy of films that includes Rapture (1999) and Fervor (2000), all of which use dual screens to represent culturally entrenched oppositions between men and women and the individual and the collective.

Other film works include Possessed (2001), which was shot in Morocco and captures a woman without chador roaming the streets of Iran in a state of madness. The woman is ignored by those around her until she reaches a platform in a public square, attracting a crowd who begin to debate her hysteric gestures. With the woman's private suffering transformed into public spectacle, the crowd begins to take on her traits of madness, while the woman eventually slips away.

In 2009, Neshat directed her first feature film, Women Without Men, for which she won the Silver Lion for best director at the 66th Venice Film Festival. Based on Shahrnush Parsipur's 1989 magical realist novel of the same name, the film follows the lives of four women during the British- and American-backed coup of 1953 in Iran.

Neshat's other feature-length films include Looking For Oum Kulthum (2017) and Land of Dreams (2021), the latter of which is part of a larger body of work of the same name that includes a photographic series and two-channel film installation (2019–2021). Shot in New Mexico in 2019, the feature film and video work follow Simin, an Iranian-American 'dream catcher', who is assigned to record the dreams and take portraits of various strangers. The photographic series includes portraits of New Mexico residents that Neshat met while filming, whom she also asked to describe their dreams. These are recorded in Farsi in many of the portraits, as seen in Paulita Cowboy (2019). All of Neshat's feature films were directed in collaboration with Shoja Azari.

In addition to winning the Golden Lion Award at the 48th Venice Biennale in 1999 and the Silver Lion for best director at the 66th Venice Film Festival in 2009, Neshat has also received the Praemium Imperiale Prize (2017), the Lillian Gish Prize (2006), and the Hiroshima Freedom Prize (2005). In 2020, she was awarded an Honorary Fellowship by the Royal Photographic Society.

Shirin Neshat's work has been featured in solo exhibitions, group exhibitions, and film festivals globally throughout her career. The Detroit Institute of Arts held a major survey exhibition of her work in 2013, followed by The Broad, Los Angeles, which staged the retrospective Shirin Neshat: I Will Greet the Sun Again in 2019.

Read More Ocula News Shirin Neshat and Robert Capa Will Be in Focus at Photo London 2021 London, 10 June 2021 Each will have a solo exhibition when the photography fair takes place in September.

Related Video & Audio Shirin Neshat: the power behind the veil 11 May 2016, Louisiana Channel, Louisiana Museum of Modern Art In many middle eastern cultures men are totally restrained from any expression of emotion, says Iranian artist Shirin Neshat (b. 1957) in this interview: "All my photographs are about controlled emotions. They are always a juxtaposition of the dark side of life and the good side of life. Of light and darkness. Pain and joy. Violence and...