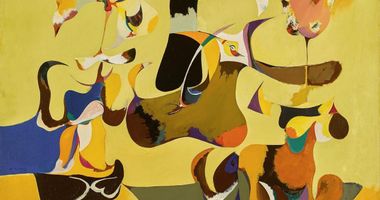 Arshile Gorky is regarded as the direct connector between American Abstract Expressionism and European Surrealism. During his short life, he fused these styles to create mesmerising paintings that would influence generations of artists.

Gorky's life was marred by trauma. As a child, he was witness to the genocide of Armenians and fled his native country following the death of his mother in his arms. He moved to America with his sister in 1920. In a period of reinvention, he changed his name from Vostanik Adoian and shed his Armenian identity. Becoming Arshile Gorky was an opportunity to fabricate his past: he claimed the Russian writer Maxim Gorky as his cousin and presented himself as an accomplished portraitist taught by Kandinsky.

After settling in New York, he studied at the National Academy of Design and taught at the Grand Central School of Art between 1926 and 1931. His artistic influences included Paul Cézanne, Pablo Picasso, Joan Miro, and Paolo Uccello, as well as Fayum portraits. Through museum visits and poring over books, he assimilated these artist's avant-garde styles and honed his technical skill while rebuffing those critical of his approach with his contempt for originality.

As he built his life in New York he forged informative friendships with artists, including Willem de Kooning. He continued to concentrate on his style, ever learning new processes and submerging himself in artist debates. By 1930, Gorky was becoming recognised. He participated in the Works Progress Administration's Federal Art Project, enjoyed patronage from Abby Aldrich Rockefeller, and joined the Guild Art Gallery. His works were exhibited in America's leading institutions with Painting (1936–1937), a Picasso-style work, being one of the Whitney Museum's first purchases.

Arshile Gorky's prominence drew him into Surrealist circles and into the most exhilarating period of his career. During the late 1930s and the early 40s, he forged a close alliance with Anton Breton, leading to his representation by Julien Levy Gallery. He also met Chilean Surrealist Roberto Matta, forming a friendship that impacted his work and rocked his personal life. Matta encouraged Gorky to thin his paint with turpentine, and Gorky began to incorporate automatic drawing within his experimental and spirited paintings. The Liver is the Cock's Comb (1944) is an image where colours melts and forms simmer.

Arshile Gorky's landscapes of this time were majestic, but as his star ascended, his personal life took many tragic turns. A studio fire in 1946 destroyed numerous paintings, he was terminally diagnosed with rectal cancer, and a couple of years later he broke his neck. This resulted in the loss of movement in his painting hand. His devastation and agony were only compounded by his wife leaving him following her affair with Matta. Gorky took his life in July 1948. A chalk note left on a crate read, 'Goodbye My Loveds'.

Read More
Related Press There hasn’t been a major group show of Abstract Expressionism in Europe since 1959 22 September 2016, Independent

In 1959, New York's Museum of Modern Art sent an exhibition to eight European cities—concluding at London's Tate gallery—with the calmly self-assured title of The New American Painting. It feature

Be among the first to know when new artworks and exhibitions by Arshile Gorky are added to Ocula.
Sign Up Login