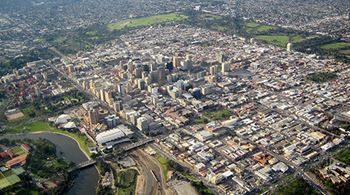 Australian contemporary art discourse often acknowledges the friendly rivalry between Sydney and Melbourne but forgets the slew of Australian art centres outside of these two cities that are both thriving and making meaningful contributions to the sector and to the economy. Adelaide is one such centre. This southern city demonstrates what can be accomplished by focussing on a local community.

Adelaide is situated in the traditional country of the Kaurna people of the Adelaide Plains. The city's essence is perhaps best emulated in ACE Open, Adelaide's pre-eminent contemporary art space. Established in 2017, ACE Open was built on the trailblazing 116-year history of its predecessors—the Contemporary Art Centre of South Australia and the Australian Experimental Art Foundation—through the directorship of Liz Nowell. ACE Open has hosted exhibitions with well-known Australian names such as Jason Phu and Sally Smart, and presented contextually rich group exhibitions curated or co-curated by guest curators.

The Art Gallery of South Australia is the major collecting state institution in Adelaide. Visiting audiences are greeted by a major work conceived by Australian artist Lindy Lee. Currently directed by Rhana Devenport, the institution boasts a collection of almost 45,000 local and international works spanning a range of media. It also co-hosts the Adelaide Biennial of Australian Art, which is Australia's longest running survey of Australian art and has been operating every second year since its debut in 1990. The next iteration of the Biennial will be held from 29 February to 8 June 2020, and is being curated by Leigh Robb, curator of contemporary art at the Art Gallery of South Australia.

The Anne & Gordon Samstag Museum of Art is the major creative centre associated with the University of South Australia. Established in 2007, the institution is also affiliated with the prestigious and competitive Anne & Gordon Samstag International Visual Arts Scholarships, which provide mobilising opportunities for chosen emerging Australian artists to study abroad.

The JamFactory is a craft-and-design venue focussed on ceramics, glass, furniture, jewellery, and metal work, providing the city with an outlet for these disciplines. The city is also well-represented commercially with venues such as Hill Smith Gallery and Hugo Michell Gallery. Non-commercial artist-run spaces such as FELTspace and the Unbound collective also exist.