Juan Ford is an Australian contemporary artist known for his hyper-realistic paintings, as well as sculptures and installations. Experimenting with visual and spatial perception, the artist expands the boundary of painting as a medium and process, the inextricable relationship between humankind and nature, and his evolving self.

Ford has employed the photorealistic modes of representation and anamorphic imageries that have come to characterise his practice since the early stages of his career. For example, the painting Chrysalis (2001)—from one of his earliest series, 'Clone'—depicts his partner Emily against a greenish sky. The anamorphic shape next to her transforms into a wire satellite when the painting is viewed from the side. In an interview with online magazine Sleepy Brain in 2003, the artist said that the satellite signifies Emily's search for opportunities. The Big Prayer (2002)—another hyper-realistic painting from the same series—shows a man with a doppelgänger. A pair of wireframe robot hands visible in the background, held together as if praying, allude to ideas of cloning and artificial intelligence. The artist's 'Anamorphic' series (2006) consists entirely of distorted images. Each painting is laid flat on a surface with a reflective cylinder on it, so that the work's subject becomes recognisable on the mirror. Cleanliness, Godliness depicts Marcel Duchamp's urinal, while In the Mind of the Painter portrays a profile of a skull.

Ford's works often combine figuration, landscape tradition, and botanical illustration—the three elements that are, in the artist's words from an interview with The Sydney Morning Herald in 2014, 'the most unhip' of the Australian art canon. For a touring exhibition commissioned by La Trobe University Art Institute and the Australia Council for the Arts titled Lord of the Canopy (2012–2014), the artist built a eucalyptus tree out of logs and branches with metal joints nailed to them. This process of reconstructing a tree inside alluded to the impact of human intervention on the environment. The installation travelled to Mildura Arts Centre in 2013 and McClelland Sculpture Park+Gallery, Melbourne, in 2014.

By merging figuration, landscape, and botanical illustration in his paintings, Ford challenges the fixity of genres and offers a new mode of representation. Inverted World, a solo exhibition at Brisbane's Jan Manton Art in 2007, presented portraits of individuals overlaid with shadows of leaves, inverting the prominence of nature over figuration in traditional Australian landscapes. As noted in Juan Ford: Artist of Seduction, published by Ocula Magazine, Australian flora also constitute crude anthropomorphic forms in his paintings such as Disobey Yourself (2013) and Guardian (2018), the latter of which features a human bust with a head that is made up of tree leaves.

Ford is also recognised for his introspective self-portraits, which were nominated for the Archibald Prize in 2012, 2014, 2015, and 2016. In Ultrapilgrim (2012), the artist portrays himself as a pilgrim figure journeying through life with a black plastic bag over his head and wearing a white garment fashioned like wings on his back. Regaining sight (a meditation on Rose Soady) (2016) pays homage to Rose Soady, an Australian printmaker and author who was the muse and business partner of artist Norman Lindsay. By placing her portrait over his profile, Ford references the process of losing oneself and finding inspiration or the muse while painting.

In addition to his self-portraits, Ford is acclaimed for his portraits of public Australian figures. Sir Isaac Isaacs (2014), for example, is of the first Australian-born governor-general and hangs in the country's Parliament. Other portraits include those of former Premier of Victoria John Brumby (2012) and chancellors and vice-chancellors of universities (for example, Chancellor Fay Marles, 2005, and Vice-Chancellor Richard Larkins—Monash University, 2007).

Ford studied engineering before graduating with a BFA in Painting from Melbourne's RMIT University in 1998, where he also earned his MFA in 2001. Selected solo exhibitions include Blank at Galerie du Monde, Hong Kong (2019); Solo Show at THIS IS NO FANTASY + dianne tanzer gallery, Melbourne (2015); Juan Ford: The Instant, Western Plains Cultural Centre, Dubbo (2011); and Make Nature Better, Sullivan+Strumpf, Sydney (2011). He has also participated in a range of international art fairs, notably Sydney Contemporary (2018, 2017); Auckland Art Fair (2013); and Art Basel in Hong Kong (2013). 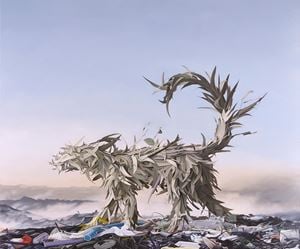 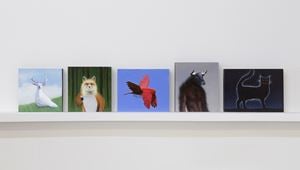 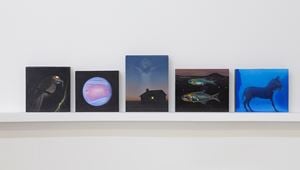 Juan FordThe Alicanto, An animal in the Form of a Sphere, A Banshee, Abtu and Anet, The Three-Legged Ass, 2020Oil on board, set of five
9 x 10 cm THIS IS NO FANTASY dianne tanzer + nicola stein Contact Gallery 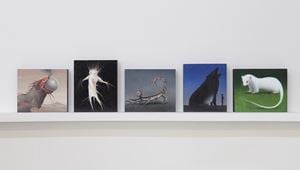 Juan FordThe Eastern Dragon, The Mandrake, The Manscorpion, An Animal Imagined by C.S. Lewis, An Animal imagined by Edgar Allan Poe, 2020Oil on board, set of five
9 x 10 cm THIS IS NO FANTASY dianne tanzer + nicola stein Contact Gallery 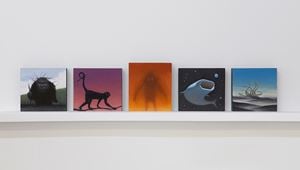 Juan FordA Troll, The Monkey of the Inkpot, Thermal Being, Bahamut , The Eight-Forked Serpent, 2020Oil on board, set of five
9 x 10 cm THIS IS NO FANTASY dianne tanzer + nicola stein Contact Gallery 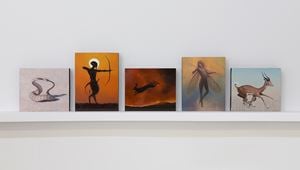 Juan FordUroboros, The Satyr, The Lunar Hare, A Fairy, An Antelope with Six Legs, 2020Oil on board, set of five
9 x 10 cm THIS IS NO FANTASY dianne tanzer + nicola stein Contact Gallery 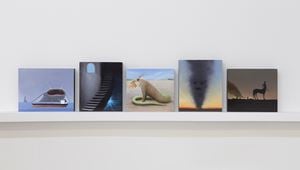 Juan FordThe Kami, A Bao A qu, The Chimera, A Jinn, The Centaur, 2020Oil on board, set of five
9 x 10 cm THIS IS NO FANTASY dianne tanzer + nicola stein Contact Gallery 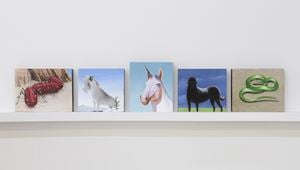 Juan FordA Creature Imagined by C.S. Lewis, The Barometz, The Unicorn, The Mountain Hui, The Amphisbaena, 2020Oil on board, set of five
9 x 10 cm THIS IS NO FANTASY dianne tanzer + nicola stein Contact Gallery
Featured ArtworksView All (42) Featured Artworks 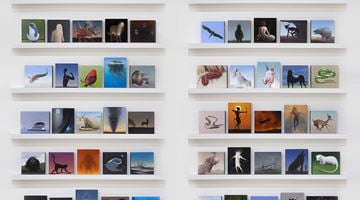 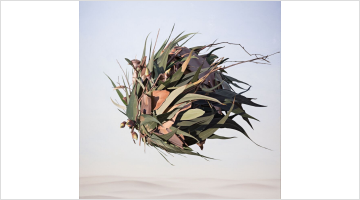 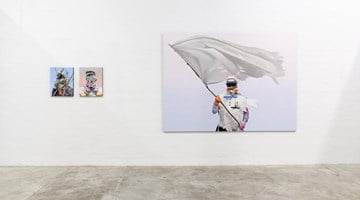 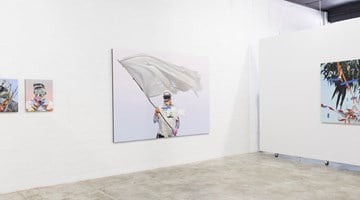 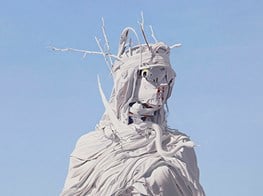 At Galerie du Monde, Hong Kong, the centrepiece of Juan Ford 's recent solo exhibition Blank (15 March–20 April 2019) was Recollector (2018), a hyper-realistic portrait of a solo female figure standing against a clear blue sky, the painting cropped at her knee. She is costumed in white drapery, although fragments of red, blue, and yellow... 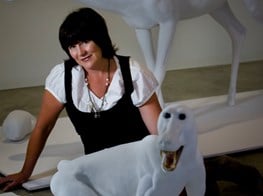 Dianne Tanzer established her gallery, Dianne Tanzer Gallery + Projects in Melbourne, Australia in 1990. Established as an exciting platform for Australian contemporary art, it continues to deliver a robust exhibition program. This year the gallery is undergoing a significant shift as it joins forces with another Melbourne stalwart, Helen Gory... 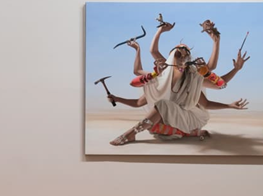 Related Press Parents' letters to arrive from the grave as Bendigo exhibition probes the past 19 April 2018, The Sydney Morning Herald

When artist Gabrielle De Vietri was asked to respond to Thomas Kennington's Homeless (1890), as part of Bendigo Art Gallery's New Histories exhibition, she designed a project based firmly in family, focusing on parenthood, deep connections and love. Letters to the Living – a time capsule of letters from parents to their children – will be stored... 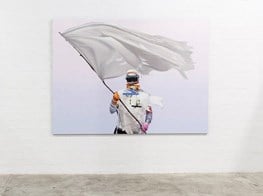 Related Press Juan Ford at This is No Fantasy + Sue Dodd at Anna Pappas 25 November 2015, The Age

Photorealism and hyper-realism are troubling genres. All too often we're left with empty gestures, pointing no further than back to the painting itself. Where the job of realism is to evoke the lived experience, hyper-realism might be read as painting's equivalent of the heavy metal guitar solo: all show and little substance. Luckily, Juan... 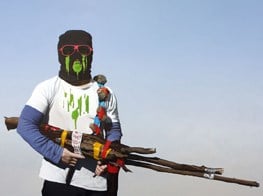 After a visit to the local store to buy a balaclava and sunglasses, Juan Ford dressed himself in a T-shirt that he splattered with green paint. He made a makeshift gun from twigs collected from around his home, located on the outskirts of Melbourne. He then set up a camera in his back yard and took photographs.

Be among the first to know when new artworks and exhibitions by Juan Ford are added to Ocula.