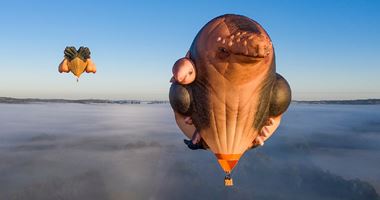 Artist Patricia Piccinini is most recognised for her hyper-realistic human-animal hybrid sculptures rendered in fibreglass, silicone, and sometimes hair. Her art has found an audience across Australia and well beyond.

Born in Sierra Leone and raised in Australia, Piccinini first attained a BA in Economic History at The Australian National University in 1988, and later a BA in Painting at the Victorian College of the Arts in 1991.

Piccinini began her sculpture career in the late 1990s by creating machine-like forms that examine the naturalisation of technology in the contemporary world.

Though startling at first, a sense of tenderness and humour inhabit Patricia Piccinini's artworks. While her practice encompasses photography, sculpture, diorama, and large-scale installation, Piccinini works with a team of experts in her Melbourne studio to actualise her drawings, through everything from traditional hand-sculpting to 3D printing.

Piccinini's long-standing interest in relationships is apparent in her early works, which drew their inspiration from scientific—particularly genetic—experiments of the day. In the photographic series 'Protein Lattice' (1997), young models pose alongside mice with what resembles a human ear on their backs. The hybrid animal—computer-generated in the images—is derived from the Vacanti mouse, named after the American researcher who famously grew ear-shaped cartilage on it in 1997. The artist's images show the women and mice close together, unperturbed by each other's presence, suggesting that, with the advancement of technology, humans and non-human beings are no longer as distant as previously considered.

Truck Babies (1999) is a pair of pink and blue transporting vehicles made from fibreglass and automotive paint with large lights and high rotund back ends. Bringing together themes around the naturalisation of objects, the work manifests the artist's vision of the offspring of trucks that she saw during a road trip in the United States.

Examples include babies suckling from their mother's teat in the artist's The Young Family (2002) or an aged bonobo-like couple embracing in Sanctuary (2018). Even when they are physically alone, however, the artist's creations are never psychologically isolated, forging a relationship with the audience by compelling them to contemplate their own social differences and similarities.

Another sculptural work, The Lovers (2011) shows two scooters leaning against each other, their forms made softer to suggest those of animals tenderly nuzzling. When speaking to Victoria Lynn for Ocula Magazine, the artist said of the work that 'we see machines imagined as wild—rather than domesticated animals—and this suggests an anxiety about technology escaping our control.'

In 2013, Piccinini broadened her media to include hot-air balloons with Skywhale, a massive hot-air balloon of a turtle-cetacean with 10 teats, commissioned by the city of Canberra for its centenary.

Patricia Piccinini's Skywhalepapa (2020), a male companion to Skywhale, was launched in January 2021 for a tour around Australia. As Piccinini told Ocula News, the father turtle-cetacean offers an example of tender paternal care that is absent in much of popular culture.

Patricia Piccinini has been the subject of both solo exhibitions and group exhibitions.

Local Melbourne artist Patricia Piccinini is best known for her lifelike sculptures of almost-human beings. She evokes fantasy worlds that are so close to being real that they make us question what it

In the 1980 historical drama, The Elephant Man, the titular character John Merrick is chased by a mob into a railway station toilet. Finding himself trapped by the baying crowd, Merrick screams, "I

It's six o'clock in the morning and I'm in a hot air balloon high above the Yarra Valley to get a glimpse of the Skywhale. She floats majestically in the morning sky, all 10 breasts hanging pendulousl

The word "love" covers a multitude of feelings that span everything from sexual desire to a connection with the environment. The works by two women artists at Victoria's TarraWarra Museum of Art show

Be among the first to know when new artworks and exhibitions by Patricia Piccinini are added to Ocula.
Sign Up Login