An art exhibition has opened in Korea's Demilitarised Zone (DMZ), the 4km-wide border that has separated North Korea from South Korea since the end of the Korean War in 1953. 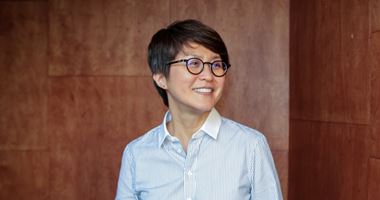 The 2021 DMZ Art & Peace Platform brings works to five sites in and around the DMZ—the Dorasan and Jejin train stations, the Paju Guard Post, the National Institution of Unification Education, and UniMARU, a former customs and inspection office that was remade into a cultural centre whose name translates to 'one space'.

There are several standout works in the exhibition.

In their work Here/There (2021), pictured top, graphic design duo Sulki and Min painted the titular words on the ground of the empty container lot at Dorasan Station. The train station is located on the Gyeongui Line, which connected Seoul to Pyongyang prior to the Korean War. The words are meant to restore a sense of place to what's now a no man's land.

Nam June Paik's video Tiger Lives (2000) was broadcast around the world at midnight on 1 January, 2000, as part of the DMZ 2000 exhibition. Tigers remain a symbol of Korean national identity, despite being extinct on the Korean peninsula since the Japanese colonial era. Both Tiger Lives and Paik's installation Elephant Cart (2001), which hints at different cultures along the Silk Road, suggest the hope that different countries and cultures can connect through information technology.

Haegue Yang's sculpture Migratory DMZ Birds on Asymmetric Lens – Kyott Kyott Vessel (Pale Thrush) (2021) was inspired by a meeting between the leaders of North and South Korea that took place in Panmunjom in 2018. Reporters strained to record a conversation between the two leaders on a pedestrian bridge, but only picked up birdsong and the clicks of camera shutters. A 3D-printed resin thrush tops the sculpture's soapstone pedestal, which is carved with the geographical coordinates of the DMZ and phrases such as 'Dispersion / Dislocation / Displacement'.

International artists Francis Alÿs, Marjetica Potrč, and Studio Other Spaces will also show in the exhibition.

Comprised of artists Olafur Eliasson and Sebastian Behmann, Studio Other Spaces made Condensation pavilion (2017) out of bamboo, wire, and synthetic mesh. It collects fog and condenses it into a stream that flows into the Imjin river, which crosses the DMZ. Condensation Pavilion is part of artist Jae-Eun Choi's Dreaming of Earth initiative, which seeks to use architecture and design to reunite South and North Korea.

Marjetica Potrč's wall drawing What Is DMZ Soil Made Of? (2021) also draws attention to the ecology of the Demilitarised Zone. It lists the constituents of the soil there, including dirt, microorganisms, decaying plants, people, and animals, and landmines.

Marjetica Potrč, What Is DMZ Soil Made Of? (2021). Acrylic paint on wall. Courtesy the artist and Galerie Nordenhake, Berlin/Stockholm/Mexico City. Photo: Kim San.

The 2021 DMZ Art & Peace Platform was created by artistic director Yeon Shim Chung with assistant curator Taehyun Kim, and co-ordinator Sojin Joy Kim. It was backed by South Korea's Inter-Korean Transit Office, an organisation affiliated with the Ministry of Unification.

Their goal is to re-imagine the DMZ as a symbol of peace and ecological recovery instead of division and war.

The exhibition continues until 15 November. —[O]

Works by artists in the 2021 DMZ Art & Peace Platform.