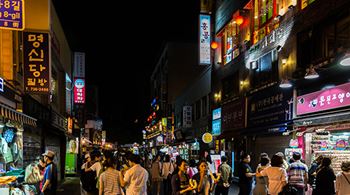 Korea's capital city for more than 600 years, Seoul is today the nation's cultural centre, housing many museums, galleries, and exhibition venues. The National Museum of Modern and Contemporary Art (MMCA Seoul) lies at its heart, located next to the historical site of Gyeongbokgung Palace, which served as the main royal palace in the Joseon period (1392–1910). With its main branch based in Gwacheon, Gyeonggi-do, the MMCA Seoul opened in 2013 with the mission to deliver modern and contemporary art to the public. Some of the iconic artists to have been exhibited at MMCA Seoul include Marcel Duchamp, Yun Hyong-keun, Choi Jeong Hwa, Shirin Neshat, and William Kentridge. The MMCA is also the site of prestigious awards such as the MMCA Hyundai Motor Series, dedicated to pioneering Korean artists, and the Korea Artist Prize.

From Gyeongbokgung, take Seoul's Metro or—on a nice day—a ten- to twenty-minute walk to galleries in the nearby Samcheong District, also known as 'gallery street'. Kumho Museum of Art, founded in 1989 to promote Korean art, houses the works of artists who have shaped modern Korean art—including Nam June Paik, Lee Ufan, and Kim Whanki—as well as emerging Korean artists. Since the mid-2000s, Kumho has also focused its programme on design and architecture.

Gallery Hyundai, which stands right next to Kumho, was founded in 1970 by the pioneering gallerist Park Myung-ja. One of the first galleries to introduce abstract art to Korea, Gallery Hyundai represents leading Korean artists Kang Ik-Joong, Kwon Young-Woo, and Moon Kyungwon, amongst others, as well as international artists such as Iván Navarro and Robert Indiana.

Some of the leading contemporary galleries in the world can be found in Samcheong district as well. Kukje Gallery, founded in 1982, is known for its roster of Korean and international artists including Anish Kapoor, Bill Viola, Candida Höfer, Gimhongsok, Haegue Yang, and Kimsooja. Arario Gallery, which opened in 1989, has been innovative in introducing Indian and Southeast Asian artists to Korea. A regular presence in Frieze New York and Art Basel in Hong Kong since the early 2000s, PKM Gallery has exhibited Lee Bul, Olafur Eliasson, Bruce Nauman, and Katie Paterson, among others.

Other galleries are scattered throughout Seoul. One of the first major art galleries to open in Korea, Gana Art is a chief Korean and Asian contemporary art gallery noted for its public art projects. ONE AND J. Gallery, in Jongno District, was founded in 2005 and is dedicated to contemporary artists, among them Suyoung Kim, Min Ha Park, and New Zealand-based Seung Yul Oh. CHOI&LAGER Gallery was founded by Sunhee Choi and Jari Lager, and established a Seoul outpost in 2016.

Those wanting to experience contemporary Korean culture alongside art may venture to Seoul Museum of Art (SeMA), located in the former building of the Supreme Court of Korea and offering public exhibitions that address social issues. Designed by the acclaimed architect Zaha Hadid, Dongdaemun Design Plaza's diverse exhibition programme encompasses design, fashion, and art, both Korean and international.

Some of Seoul's privately-run art museums are also worthwhile for their vast collections. Leeum Samsung Museum of Art, which opened in 2004, houses 36 pieces that are recognised as national treasures. Its buildings are designed by the architects Jean Nouvel, Rem Koolhaas, and Mario Botta.

Many Things All at Once

A Walk into You

ONE AND J. Gallery View Exhibition
Sunmin Park, Lines that are Erased while Drawing (2021). Single-channel video, colour, sound, 33'13". Courtesy One and J. Gallery.