Postponed twice due to Covid-19, the 13th Gwangju Biennale, Minds Rising, Spirits Tuning (1 April–9 May 2021) has finally opened with around 450 artworks by 69 artists, including 40 new commissions.

Directed by Defne Ayas and Natasha Ginwala, the exhibition gathers a multitude of spiritual and technological perspectives that encompass ancestral, feminist, queer, indigenous, and shamanist theories and practices while addressing discourses on new technologies such as neural networks and deep learning. 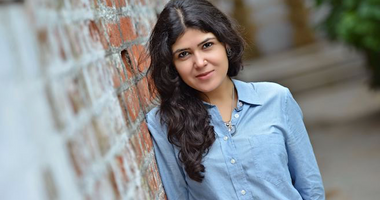 Though the exhibition period has been halved, the scale of the Biennale has expanded. Alongside the international programmes of the Gwangju Biennale Commission and Pavilion Projects and collateral exhibition MaytoDay, the Biennale is presented across eight venues in Gwangju, and extended through online programmes.

Gallery 1 in the Exhibition Hall, free of charge for the first time, establishes a communal mindset through which to explore the Biennale's planetary focus. Here, a black circular wall forms an outer and inner circle, while robots move around disinfecting the gallery space to prevent the spread of Covid-19. 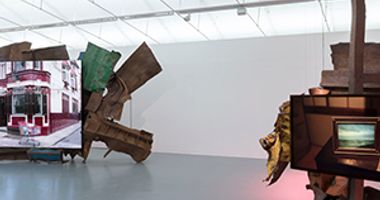 On the one side of the black wall, taking up roughly one third of the inner circle of Gallery 1, is Moon Kyungwon's woven carpet installation Promise Park (2021). Intended as a 'park' where visitors can sit together, the 'social tapestry' visualises the transformation of the urban landscape in Gwangju, from Japanese colonialism to modern industrialisation, through abstract patterns in faded blues, browns, and greys.

On the other side of the inner circle of Gallery 1, John Gerrard's annual simulation Corn Work (Corrib) (2020), shows four straw figures drawn from Celtic paganism performing a ceremonial dance by tracing a circular motion that references cycles of agriculture production. To create these virtual figures, Gerard prototyped choreographers of various ages and created a perpetual choreography by using motion matching and neural network technologies.

Minds Rising, Spirits Tuning showcases a broad range of works from the Gwangju National Museum, the Museum of Shamanism, and the Gahoe Minhwa Museum in Seoul, intimately woven into curated constellations. There is a particular focus on female shamans and goddesses amid these artefacts, which referenced Korean folk religion and shamanic and Buddhist rituals.

In the outer circle of Gallery 1, Stone Grandmother comprises an undated ritual object in the shape of a human head made from a stone and Korean traditional clothes taken from the Museum of Shamanism, along with a 20th-century painting of the unknown Great Spirit Grandmother, which depicts a woman in traditional clothes holding a medicinal plant.

These objects and iconography are tuned to the articulations of collective intelligence in a networked world that Gallery 1 presents, which expands into concepts of indigenous cosmology, feminism and queer culture, post-humanism, and matrilineal collectives in the remaining galleries in the Exhibition Hall.

Amidst the national and global upheavals prompted by the pandemic, Minds Rising, Spirits Tuning crosses past, present, and future to assert a multiversal, polyphonic solidarity...

Throughout the Exhibition Hall, Diogo Passarinho Studio's exhibition design plays a major role in elucidating the curatorial concept of connecting divergent perspectives in an organic way, with each gallery providing a unique sensory experience.

For example, Gallery 3 consists of a maze of tunnels made of layered transparent fabrics that frame works invoking themes of feminism, queerness, concealment, and surveillance.

Here, Lynn Hershman Leeson's film installation, Shadow Stalker (2020) confronts issues of police surveillance and algorithmic violence in a neo-colonialist society through a feminist lens. In the film, actresses Tessa Thompson and January Steward—featured in the role of 'The Spirit of The Deep Web'—outline the racial bias and aggravation of social injustice embedded in artificial intelligence.

As the exhibition progresses in the Exhibition Hall, gallery spaces gradually become darker, creating a solemn atmosphere that reaches its apex in Gallery 5, located on the lowest level in the building.

Leeson's 'living sculpture' is a portable purification system, purifying contaminated water with electricity and plastic-eating bacteria. During the purification process, an image of a woman appears within the etched panels upon each of the six pedestals, pointing to matriarchal wisdom as a means of correcting the climate crisis.

As a whole, Minds Rising, Spirits Tuning follows a strategy of fragmentation and extension to deconstruct the power embedded in the vestiges of modern classification systems, Western imperialism, and global capitalism while seeking knowledge and advice from the subjectivities and cultures that exist beyond the western frame.

At Gwangju National Museum, discourses surrounding death, trauma, and mourning, as well as the reparation of spirit objects, come to the foreground in works like Theo Eshetu's Ghostdance (2020). The single-channel video depicts an intervention in ethnographic collections with Butoh dancer Yuko Kaseki and choreographer Edivaldo Ernesto, who respond to objects from the Asian and African collections at Berlin's Ethnological Museum and the Museum of Asian Art.

In the Gwangju Theatre, Korea's oldest cinema, there is a focus on different forms of sovereignty. Forward with the Ancestors: Day in the Life (2020) by Karrabing Film Collective, an intergenerational group comprising around 30 members most of whom are Indigenous to the Northern Territory in Australia, demonstrates how art can function as a means of survival.

Layered with sharp satire and hip-hop tunes, the five-channel video installation documents the events of a single day, tracking the obstacles the collective encounters, such as the police suddenly coming in during a meal.

Karrabing Film Collective, Forward with the Ancestors: Day in the Life (2019) (still). Courtesy the artists.

Given the events of 2020, which have seen a wave of protests against police malpractice (and state indifference) across the world, Forward with the Ancestors: Day in the Life is a call to action, much like this edition of the Gwangju Biennale.

Amidst the national and global upheavals prompted by the pandemic, Minds Rising, Spirits Tuning crosses past, present, and future to assert a multiversal, polyphonic solidarity that aims to heal from the impact of the Enlightenment and imperialist expansion. That is, to come into tune and rise.—[O]