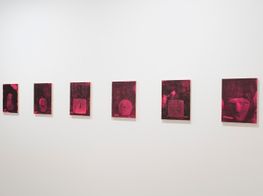 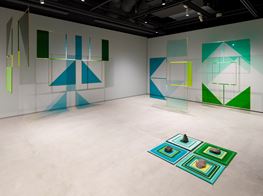 Claudia Peña Salinas began her ongoing project 'Tláloc' in 2013. It comprises video, photographs, and sculptures, and investigates the eponymous Aztec deity of rain and lightning as well as his consort, Chalchiuhtlicue—the goddess of horizontal waters and fertility. The latest iteration of 'Tláloc' is on view now in Atlpan, a solo exhibition at THE CLUB, Tokyo, running until 8 November, marking Salinas' first exhibition in Asia.

Salinas' sculptures cross boundaries between traditional and contemporary aesthetics. In the floor pieces A, C, H, and L (all 2019 and presented for the first time at THE CLUB), textile patterns within square frames correspond to traditional Aztec colour schemes and use natural fibres, their lines framing large stones placed at the centre of each composition. The clean, geometric approach of the fibres pays homage to an aesthetic embedded into the language of 20th- and 21st-century sculpture, in doing so repositioning an inherited set of historical mythologies and a post-Minimalist approach. The placement of the large stones in each square also recalls the design of Japanese Zen gardens, creating a layered vision of architecture and environment that speaks to but also remains outside of European paradigms.

Atlpan's title combines the Nahuatl word for water, 'atl', with the prefix for place, 'pan', which illustrates the core themes of Salinas' work: including water as a metaphor for fluidity and interconnectedness. Central to the artist's presentation at THE CLUB is a new video work entitled Metzilocan (2019), which further plays with word fragments. While previous videos have been more documentary in nature—focusing on contextualising the artist's journey in researching 'Tláloc'—Metzilocan presents a poetic perspective; across the ten-minute film a series of photographs and moving images present a range of water scenes and monuments to water gods. While these images play across the screen, subtitles spell out different fragmentations of the words 'Chalchiuhtlicue' and 'Metzilocan'. This fragmentation of language is echoed not only in the exhibition title but also in the titles of the other works in the show, such as the wall works Chal and Licue (both 2019).

While Atlpan is anchored to the artist's research around Chalchiuhtlicue and Aztec knowledge systems, the show is also deeply influenced by Japanese aesthetic and narrative traditions. Works were created during the artist's stay in Japan's Nagano prefecture, and draw on the 10th-century Japanese Tale of the Bamboo Cutter. In the story, an elderly bamboo cutter discovers a young girl inside a glowing bamboo stem, and raises the child with his wife. The girl eventually returns to the moon—her true home—wearing a feather robe and escorted by heavenly beings. The hanging works Chal, Alchi, and Licue are reminiscent of shoji—traditional Japanese sliding doors and window frames made from wood and translucent paper—with the space between brass frames cut through with plexiglass triangles and rectangles in shades of blue, green, and luminous yellow.

For Salinas, a key turning point in the visual structure and approach of her practice was her solo exhibition, Anaranja, in New York in 2012. Curated and commissioned by Ingrid Chu and Savannah Gorton at Forever & Today, the exhibition title is a portmanteau of the Spanish word for the fruit and the colour orange. Inspired by the abundance of instances that expressions of both oranges occur in the art organisation's neighbourhood (the border between Chinatown and the Lower East Side), the artist created an installation whose materials were wholly sourced within the neighbourhood itself. She repeats a similar methodology for her exhibition with THE CLUB, having collected the stones for her installations while wandering through Nagano's forests.

Gathering conceptual and material inspiration from each location she exhibits and works in, from Mexico, the United States, and now Japan, every iteration of 'Tláloc' becomes a richer expression of an ongoing study; what the artist describes as a 'travelogue that compresses past and present, vernacular and sacred.' —[O]