THE CLUB is pleased to present Atlpan, the first solo exhibition of Mexican born female crossdisciplinary artist Claudia Peña Salinas in Japan. Peña Salinas lives and works in Brooklyn, New York. Her works are inspired by Mexican landscape, indigenous ideas, and mythology, and her works have been in international museum collections including The Whitney Museum of American Art. For this exhibition, Peña Salinas has created new works during her stay at Nagano prefecture, Japan, starting with her research into the figure of Chalchiuhtlicue1 and taking inspiration from hikes around the mountains in search of natural objects for her sculptures, and from the Japanese folklore story The Tale of the Bamboo Cutter.2

'Research, travel and the process of collecting inform my practice. The work unfolds as a sort of travelogue that compresses past and present, vernacular and sacred, through the building of a personal narrative and the research of aesthetic, political and historical issues of interest to me.' —Claudia Peña Salinas

The title of the exhibition, Atlpan, comes from Nahuatl3. 'Atl' means water and 'Pan' as a prefix means place. The exhibition consists of four hanging works which divide the gallery space. They are inspired by the traditional Japanese architecture of Shōji—doors or windows consisting of translucent paper over a wooden frame, four sculptural works placed directly on the floor and a new video focusing on language through the figure of Chalchiutlicue and the Nahuatl words for water (atl) and moon (metztli).

1 Chalchiuhtlice is the Mesoamerican deity related to water, rain, sea, and fertility.

2 The Tale of the Bamboo Cutter: Also known as The Tale of Princess Kaguya（かぐや姫の物語 Kaguya-hime no Monogatari）which is after its protagonist. It is about the life of a mysterious moon child called Kaguya, who was discovered as a baby inside the stalk of a glowing bamboo plant.

3 Nahuatl is an Uto-Aztecan language spoken mainly in central Mexico by about 1.5 million people. 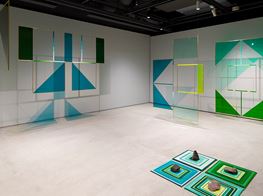 Claudia Peña Salinas began her ongoing project 'Tláloc' in 2013. It comprises video, photographs, and sculptures, and investigates the eponymous Aztec deity of rain and lightning as well as his consort, Chalchiuhtlicue—the goddess of horizontal waters and fertility. The latest iteration of 'Tláloc' is on view now in Atlpan , a solo...

Sign up to be among the first to know when new exhibitions by Claudia Peña Salinas or at The Club open.
Sign UpLogin