Conquering the Ghosts of Empires in Hong Kong

A reconciliation occurs in Ghosts of Empires, a group show curated by Ghanaian-American curator and critic Larry Ossei-Mensah as a transgressive tool to keep the past relevant, not forgotten nor misremembered. 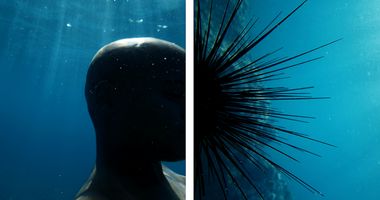 The street festival is rooted in an exuberant celebration of a community linked to the Windrush generation—those invited to the United Kingdom from the Caribbean after World War II to ease labour shortages, who experienced rising levels of racism after landing.

The photograph captures a street crowd smiling and dancing under the sun; it was made using a picotage printing method of stippling that creates highlights and shadow patterns similar to Caribbean breeze-block fences, altering the focus to two figures.

The use of picotage to scarify the image is an attempt to control the external gaze, the artist says; a 'veil to disguise [my] figures within those moments'.

There is poetry in the new 'trade' route Mensah has created here, which offers a glimpse into the lived histories of colonialism as experienced by those bearing its burden today 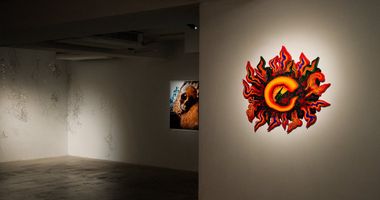 The artist's work Binondo Church, Manila, Philippines (2021), shows an early 20th-century postcard image of the ancient cathedral erected during Dominican rule in the 1500s to convert the local Chinese population, painted on a large-scale weaving of torn cotton fabrics.

Such colonising efforts have been seen throughout history, from the Caribbean to Southeast Asia, and have come to affect traditional Filipino naming customs, overwriting names once adopted in relation to childbirth, valiance, and poetic titles from renowned actions. In Jalandoni's composition, the left side of the church spells out Spanish surnames in red, alluding to christianised Filipinos who assumed saintly names, recorded in the book of names Catálogo Alfabético de Apellidos, following an 1849 decree by the Spanish Governor.

Jalandoni's work speaks deeply to the transcendental power of colonial rule on identity, with the artist holding a name of Spanish descent and the Philippines boasting over a 90 percent Christian population. 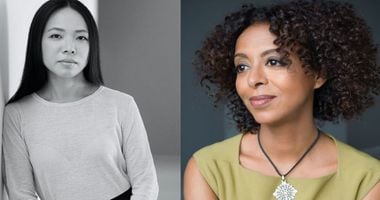 These layers of influence continue in a re-imagination of John Thomson's 1868 photo The Clock-Tower, Hong Kong by Livien Yin, in The Clock-Tower (2022). The former photographs a Sikh police officer and two Chinese sedan-chair labourers in central Hong Kong, when man-powered transportation was a common sight.

In Yin's flashe and acrylic on canvas painting, three characters sit on a rooftop. A British colony since 1841 and a Commonwealth state, the territory's native inhabitants were forced to follow colonial laws and policies since its occupation during the Opium Wars. The sunset is a critique of the British curfew on Chinese migrants in the 19th century.

With that in mind, the scene depicts a form of speculative resistance in imaging a Sikh officer and Chinese migrant sitting arm in arm, back when Hong Kong's police force was divided into an ethnic hierarchy and Sikh officers commonly enforced law onto the Chinese.

Rooted in the same era is Yin's Nightstand (2022), an acrylic on canvas painting that shows feet on a nightstand besides stained bottles of liquor and tea, drawing from mandated medical check-ups for Chinese prostitutes and brothels serving European clientele. 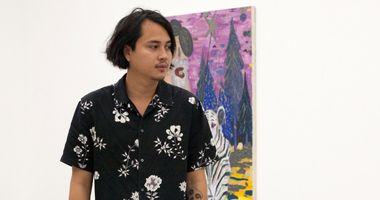 There was an intentional indignity to these exams, which, alongside curfews and physical discipline, criminalised and marginalised Cantonese and Chinese-descending ethnic groups.

But in spite of it all, says Mensah, 'There [are] a multitude of communities that have been oppressed because of colonization and imperialism ... that have been able to thrive.' 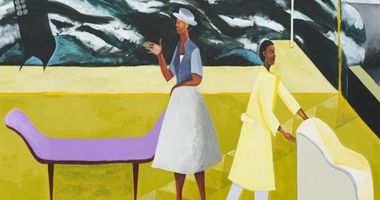 Illustrating this is a work by Delphine Desane, How do you wish to be remembered? (2022), an acrylic-and-oil portrait of a seated African woman against a red sun and blue sky. Her expression and red lip are inspired, as the artist explains, by images of Black life and motherhood: an act of representation that is missing in mainstream media.

There is poetry in the new 'trade' route Mensah has created here, which offers a glimpse into the lived histories of colonialism as experienced by those bearing its burden today, be it from Afro-Caribbean or Asian perspectives. —[O] 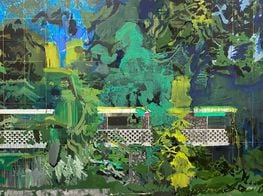 Traversing the realms of figuration and abstraction, U.K.-based Hurvin Anderson's landscapes, portraits and still lifes explore his Jamaican heritage while touching on themes of familial roots, dislocation, and the visibility of Blackness. Early 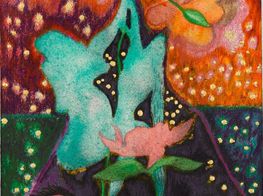 Chris Ofili is best known for his mix of religious and secular elements in work that complicates distinctions between the sacred and the profane. While his paintings and works on paper often comprise an assortment of materials—from paint, gold

The Art Gallery of Ontario's latest group exhibition offers an expansive view of artistic expression in the Caribbean.