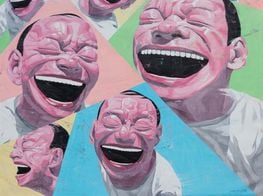 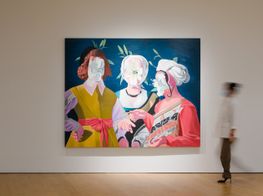 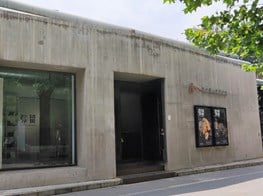 Yue Minjun's caricature of a laughing man, said to be both alter ego and self-portrait, became emblematic of the late 20th-century wave of Chinese contemporary art known as political pop.

With the end of the Cultural Revolution following the death of Mao Zedong in 1976, the 1980s saw the birth of new artistic expressions that deviated from state-approved Socialist Realism.

This came to a head in the 1980s with a flurry of self-organised exhibitions, conferences, and manifestos that became known as the '85 New Wave, a term coined by critic Gao Minglu, culminating with the landmark China/Avant-Garde exibition at the National Art Museum of China in Beijing in February 1989. 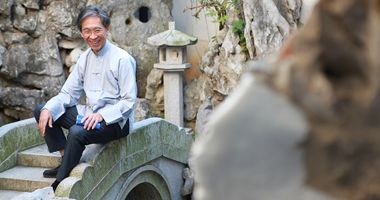 In the 1990s, international response followed, with group exhibitions such as Magiciens de la terre curated by Jean-Hubert Martin at the Centre Pompidou in Paris in 1989 and China's New Art Post-1989, organised in Hong Kong by curator and Hanart TZ Gallery founder Johnson Chang in 1993, bringing works by Chinese contemporary artists to the global stage.

The new millennium saw the establishment of art platforms in China, among them the studio complex 798 Art Zone in Beijing in 2002, which has now become a key art hub and location of the yearly Gallery Weekend Beijing.

Yue was among those artists, with early paintings such as Gweong Gweong (1993), which references the Tiananmen Square crackdown through the site's depiction overlaid with fighter jets and grinning figures, selling for $6.9 million at Christie's in 2008—a year after the artist featured on the cover of Time magazine.

Yue's grinning figures became attributed to the Cynical Realist movement—a group of artists perceived by art critic Li Xianting in the early 1990s as breaking away from the state-approved Social Realist style by incorporating parody and satire into personal reflections of the times.

In his own approach, Yue utilises the grinning figure to conceal pain. 'My work is to do with the fundamental agony of being human and the sense of confusion that comes with living in our society,' Yue explained on the occasion of his first solo exhibition in Hong Kong, The Tao of Laughter at Harbour City in 2012. 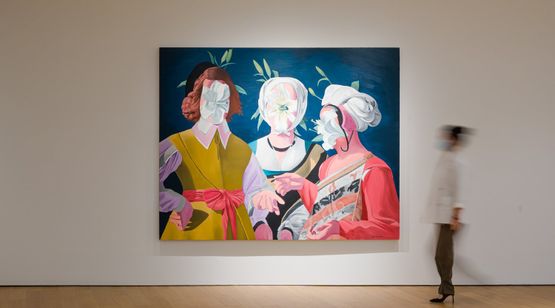 This act of concealing is furthered in his latest solo exhibition in the city—his first at a gallery in a decade—on view at Tang Contemporary Art (Smile at the Flower Sermon, 24 March–30 April 2022).

Among the 15 paintings on view, Yue incorporates floral symbolism as a means of bringing 'awareness that the truth of his subjects are hidden.'

Living in Chuncheng in China's southwestern Yunnan province for a few months in 2020, the artist looked to the city's flowers to divert from the bleakness of the pandemic.

While reflecting an anxious optimism; of waiting for the 'blossoming' of a new chapter, Yue underlines their deceptive nature.

The flowers, he explains, are merely decorative, representing 'passive obstructions' from seeing individual truths beyond markers of status, gender, and personality through signifiers such as clothing.

With this new floral symbolism, Yue opens up this illusory field further, inviting audiences to consider what lies beneath the surface.

In Hibiscus Moscheutos (2021), three female figures in swimsuits sporting short haircuts are concealed by radiant pink hibiscus flowers. In Lilium (2021), it is white lilies concealing the faces of three figures in Renaissance-era clothing, as if adapted from an Old Master painting.

Such efforts speak to the unspoken pitfalls of modernist ambitions and political ideals, or even the rift between online activities and IRL truths, with performative acts and careful selections on social media concealing the messiness and the complexity of realities both large and small.

This tactic of consolidation—what can be perceived as a kind of masking—is a thread that runs throughout these recent paintings by Yue and those from a decade ago, with some of his grinning figures on view at Tang Contemporary Art.

In the decade following his graduation from high school in 1983, Yue worked as an electrician before being stationed at an oil rig off of Tianjin for five years, sustaining an artistic practice by painting portraits of co-workers. Eventually, in 1990, he relocated to Yuanmingyuan (Summer Palace) artist village, and set about his infamous series.

At Tang Contemporary Art, some paintings are a direct continuation of this, as in Stranded (2021), where two men stand together in purple briefs. Against a gradating blue-pink background, they hold a yellow cord between their thumb and forefinger each.

Whilst their faces are pulled into unmistakable grins, the context remains ambiguous. Yue compares this illusory effect to that achieved by Western Surrealism, except that here, 'these daydreams come from the Eastern concept of sitting in meditation. The illusory world perceived in the process of meditation develops without explanation', he explains.

With this new floral symbolism, Yue opens up this illusory field further, inviting audiences to consider what lies beneath the surface. —[O]

Selected works from 'Smile at the Flower Sermon' exhibition

Few contemporary artists are more known for their self-portraits than Yue Minjun (岳敏君), whose oil paintings of himself as a pink-skinned, laughing figure have placed him as one of the most prominent Chinese artists of his generation. Born in 1962