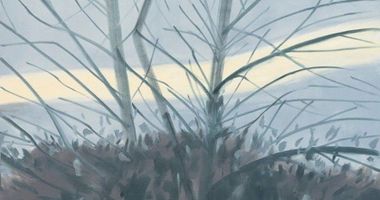 Emerging in the 1950s in New York at the height of Abstract Expressionism, Alex Katz developed a distinctive style that proposed a return to representational art. Katz's portrait and landscape paintings, characterised by flattened subjects and a bright colour palette, capture the sense of now—a state of being in the moment.

Born and raised in New York, Alex Katz studied the theories and styles of Modernism at The Cooper Union between 1946 and 1949. After graduating, he attended the Skowhegan School of Painting & Sculpture in Maine, where the artist developed his longstanding interest in the landscape.

Among frequent sitters of Alex Katz's portraits were his friends from the New York School of artists and poets, such as Rudolph Burckhardt, Jane Freillicher, Fairfield Porter, Frank O'Hara, and James Schuyler. Katz typically painted on small Masonite panels, employing the monochrome backgrounds that later came to characterise his work.

Portraits of Ada—Alex Katz's wife, whom he has painted more than 200 times—show an evolution of the artist's practice. Ada (1957)—his first portrait of her—depicts a young woman with a cool demeanour seated against a white background. In the iconic The Black Dress (1960), Ada appears six times inside an interior, each time wearing the same dress but taking a different pose. Blue Umbrella (1972) focuses on Ada's face in the rain, her hair covered in a headscarf.

Alex Katz's cut-out sculptures, which he began in 1959, were first made from canvas, then later painted directly on pieces of cut wood. Later, they evolved into shaped metal sheets, such as One Flight Up (1968): a group portrait of 37 people at a cocktail party. The work is not a conventional portrait on canvas, but instead a gathering of painted panels that have each been trimmed to reflect the silhouette of their respective figure.

In 1959, Katz began to garner wider critical attention with a solo exhibition at Tanager Gallery, New York. However, the artist found most of his success in Europe. In New York, his first major retrospective exhibition was only held in 1986 at the Whitney Museum of American Art. In a 2018 interview with The New Yorker, Katz attributed his late recognition in New York to his idiosyncratic style, which is neither strictly Pop art nor acutely realistic, saying that he 'never fit in'.

Advertising, mass media, and the fashion industry of the 1960s onward have had a lasting impact on Alex Katz's paintings, not only in their focus on close-ups of faces but also in their increasingly monumental scale. In 1977, Katz presented 23 large-scale portraits of women on a billboard in New York's Times Square. Coca-Cola Girls, his 2018 solo exhibition at London's Timothy Taylor, revolved around paintings depicting women in white bathing suits against red backgrounds that allude to the brand's signature colour.

The landscape has also been a recurring subject in Alex Katz's work since the late 1980s. In what he describes as 'environmental' paintings, the artist conveys a sense of a space that envelops through his emphasis on light and the passage of time in a day and through the seasons. His landscape paintings have been presented in solo exhibitions such as Quick Light, Serpentine Galleries, London (2016), and Alex Katz Under the Stars: American Landscapes 1951–1995, MoMA PS1, New York (1998).

View All (13)
Related Press The Colors of the Sixties 6 April 2019, Hyperallergic

The eighth floor of the Whitney Museum of American Art, as David Breslin, the Director of the Collection, sees it, is 'a place for surprises.' The elegant spaces of the museum's top floor, catching

American artist Alex Katz is known for his distinctive style of portraits featuring sophisticated yet daring women of all ages. The Lotte Museum of Art (LMOA) in southern Seoul presents the first solo

Read More
Related Press Alex Katz - 'I never had any self-confidence until I was 30' 10 November 2017, Phaidon

We've loved and admired the work of Alex Katz for a long time now so we were happy to bump into him while checking out some of his new paintings, sculptures and a show of his 1940's _Subway Drawings a

If you're in New York City and you catch the Q train at the new subway station at 86th Street, you'll glimpse a massive, scowling, photo-realistic portrait of the artist Alex Katz by his friend, the p

Alex Katz (b. New York, 1927) is known world-wide for his unique approach to contemporary representational painting, developed in reaction to the dominance of Abstract Expressionism, prior to the emer

Be among the first to know when new artworks and exhibitions by Alex Katz are added to Ocula.
Sign UpLogin