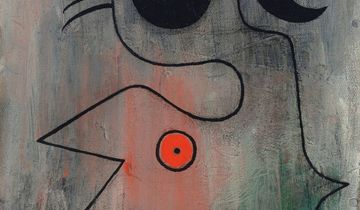 Joan Miró i Ferrà—better known as Joan Miró—was a Catalan painter, sculptor and ceramicist whose inventive style was extremely influential in the development of avantgarde art. He remains one of the best-known artists of the 20th century.

Born in Barcelona in 1893, Miró initially attended both business school and the Escola Superior d'Arts Industrials i Belles Arts in Barcelona. However, after his studies and while working as a clerk, he contracted typhoid fever, and after a period of convalescence, decided to focus on art-making.

From 1915 to 1919 Miró painted landscapes, portraits and nudes, largely at his family's home on Majorca. During this period, he experimented with a range of influences including fauvism and cubism, and the works of Vincent van Gogh and Cézanne. While sampling from various sources, these paintings remain something uniquely Miró's own, though with only a hint of the artist's distinct visual style to come.

During the early stages of his career, Miró was attracted to the inclinations of subterfuge found in the Dada movement. In 1923, he began to transition to a visual language more explicitly composed of signs and increasingly separated from representation or reality. He joined the Surrealists in 1924 and would later be described by lead surrealist André Breton as 'the most surrealist of us all'.

As well as a Surrealist, Miró was also a leader among the associated artists in explorations of the subconscious, particularly with automatic drawing. Most of his paintings began as automatic drawings in an attempt to escape the conventions of representation and the painting medium itself. Describing his 1925 painting The Birth of the World, Miró said 'Rather than setting out to paint something I began painting and as I paint the picture begins to assert itself, or suggest itself under my brush ... The first stage is free, unconscious.'

In each of his works, Miró is highly selective of which formal features of the landscape to accentuate, and which to discard. A prime example of Miró's poetic rendering of everyday scenes, The Hunter (Catalan Landscape) (1923–4) shows the Catalan landscape reduced into flattened planes. Minimal symbols represent the animals and vegetation; the titular hunter is a bare few set of lines against a flat pink representing the ground and a flat yellow sky.

In 1928, Miró visited the Netherlands and became interested in the Dutch masters. Bringing home a set of postcards from the Rijksmuseum in Amsterdam, he began a series of three paintings combining the Dutch regional style with his own unique visual vocabulary.

In Dutch Interior (I), a painting by Hendrick Martensz Sorgh is transitioned from an atmospheric image of a lute player performing for a woman to an energetic gathering of symbols across a flattened picture plane. Some aspects—such as the man's collar—have been accentuated, while others—such as the woman at the table—have been diminished or replaced. In this series, Miró's direct references to other images allow the audience to follow his path of inventive abstraction.

The Assassination of Painting

In the late 1920s, Miró became interested in the idea of the 'assassination of painting', within which he sought to escape or even destroy the traditions of bourgeois art and instead pursue more experimental forms. A work exemplary of this period, Painting (1936) was made with a mixture of gravel, sand and oil paint. The artist assured his dealer that rather than the work being ruined if some of the materials came loose when it was sent to an exhibition, the loss would 'make the surface . . . look like an old crumbling wall, which will give great force to the formal expression.'

In this period, he also experimented in collage and sculptural assemblage, as well as making costumes for ballet.

Throughout his entire career, Miró's Spanish and Catalan nationalism remained a key influence on his work.

During the Spanish Civil War, Miró was living in Paris. Deeply affected by the tragedy and tumult consuming his homeland, he was inspired to employ social criticism in his art. Works of this period also became more representational, such as in The Reaper—a mural for the Spanish Republic's pavilion at the Paris World Exhibition of 1937 that showed a peasant revolt.

Miró was also known for his Surrealist sculptures.

His earliest pieces were formed out of collections of found objects, such as Object (1936), whose media list is lengthy: 'stuffed parrot on wood perch, stuffed silk stocking with velvet garter and doll's paper shoe suspended in hollow wood frame, derby hat, hanging cork ball, celluloid fish and engraved map.' In the mid-1940s he turned towards ceramics, for which he embraced the full materiality of clay, often making intentionally imperfect pieces.

Throughout his life Miró produced many large-scale public sculptures throughout the world, in cities such as Paris, Chicago, Madrid and Barcelona (where the Fundació Joan Miró is also located). In 1958 Miró produced two murals for Paris' UNESCO building, Wall of the Moon and Wall of the Sun (1958), Composed of brick-like tiles that together bring shape to a colourful set of symbols, including the titular moon, the murals received a Guggenheim International Award.

Joan Miró's art has been exhibited widely around the world, in gallery and institutional group exhibtions and solo shows. The Fundació Joan Miró continues to promote the artist's work in Spain and internationally.

The Fundació Joan Miró website can be found here.

Pieces from the William S. Paley collection currently held by MoMA will be sold at Sotheby's in London and New York to raise funds for new acquisitions and digital initiatives.

Multi-sensory additions at the Van Abbemuseum are aimed at those with visual and auditory impairments, and anyone else who wants to experience art differently.

Painting, painted by Joan Miró in 1933, in Barcelona, is a composition of black, red, and white blobby shapes and linear glyphs on a ground of bleeding and blending greens and browns. It hangs in _J

To borrow a phrase from Antonia Carver, director of Art Dubai, Madinat Jumeirah will be turned into “art city” this week. With the start of the 10th edition of the annual fair, collectors and gallerists will converge within the conference halls of the sprawling complex to buy and sell some of the freshest contemporary works, while...