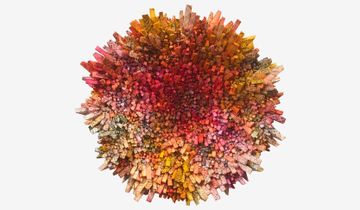 Chun Kwang Young is a contemporary South Korean artist recognised for his 'Aggregations' (1995–ongoing) series of tactile sculptural compositions that are made of multiple minute triangular forms wrapped in mulberry paper. The richly textured surfaces of these 'Aggregations' are reminiscent of the stalactites of caves or the moon with its crater-like hollows.

Chun graduated from Seoul's Hongik University in 1968, but in 1971 he moved to the United States to undertake a master's course at the Philadelphia College of Art. There, he was drawn to Abstract Expressionism, which, in his own words, 'seemed to be the best way to freely express my surprise and sadness at witnessing the huge gap between idea and reality'. Liberated from the rigid rules of traditional art, Chun began to interrogate the medium of painting in works such as ONT-010-73-43 (1973), in which long, expressionist brush strokes of many hues frame the rectangular opening of vivid red in the centre.

Increasingly dissatisfied with his work Chun returned to Korea in the second half of the 1970s. He continued to make abstract paintings, experimenting with clashing coloured stripes in works such as ONT-085 (1978) or short, stumpy strokes in ONT-093 (1986). However, Chun grew discontented with Abstract Expressionism and sought to find his own unique voice while acknowledging his Korean upbringing.

A solution came in 1995 in the form of hanji, a Korean traditional paper made from mulberry. The artist developed a process of cutting small modular forms in polystyrene and wrapping them in this paper, which he would then dye with tea or other colouring agents. These he would attach to a support to create assemblages that are now known as part of his signature 'Aggregations' series. His use of hanji was inspired by a recollection of childhood memories, when he would visit a traditional apothecary and see little hanji packages—each containing different medicinal herbs—hanging from the ceiling. For Chun, hanji signifies the Korean ethos he wished to convey.

The 'Aggregation' works vary in colour, from the monochromatic light brown in Aggregation 95-06 (1995) to shades of cool blue and green in Aggregation 18-AP027 (2018). Chun has also expanded their forms over the decades; in his solo exhibition Collisions: Information, Harmony and Conflict at Sundaram Tagore Gallery, Singapore, in 2019, for example, he presented wall hangings (such as Aggregation 19-JU45, 2019), but he has also presented free-standing sculptures as part of the series in the past. In 'Aggregations', each hanji-wrapped piece signifies the basic unit of information, while the Chinese and Korean characters printed on them allude to generations of knowledge.

Solo exhibitions of Chun's work have been held at Wooyang Museum of Contemporary Art, Gyeongju (2016); PKM Gallery, Seoul (2018); and Brooklyn Museum, New York (2018). In 2009, Chun received the Presidential Prize in the 41st Korean Culture and Art Prize from the Korean Ministry of Culture, Sports and Tourism.

Read More Ocula Feature Singapore Lowdown: Shows to See in 2020 By Tessa Moldan, Singapore Singapore Art Week returns from 11 to 19 January 2020 with a host of island-wide events, at the centre of which is the second edition of S.E.A. Focus (16–19 January 2020) at Gillman Barracks, showcasing the best of contemporary art in Southeast Asia.

Read More Ocula Conversation Frédéric De Senarclens By Ocula Editors We are very confident in Barry Keldoulis' team. The organizers have really devoted a lot of energy and we are impressed by the dynamism of the fair.