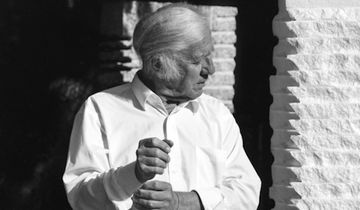 German artist Heinz Mack is best known for his monumental outdoor sculptures and contributions to 20th-century light and kinetic art–particularly as a co-founder of the influential post-war ZERO Group. Mack has, however, experimented with a wide variety of mediums ranging from light-reliefs, paintings, drawings, and photographs, to sculpture made of materials such as stone, light-rotors, and light-stelae.

Mack's artistic career began with his studies in the mid-1950s at Düsseldorf's Kunstakademie. In 1956, he earned a degree in philosophy from the University of Cologne. After graduation and along with fellow German artist Otto Piene, Mack co-founded the significant post-war avantgarde group ZERO in Düsseldorf. The group rejected the popular expressive, abstract painting of the time, and instead used light and motion to explore new modes of perception. The group attracted artists Günther Uecker, Yves Klein, and Lucio Fontana, amongst others. In a 2014 interview with Ocula Magazine, Mack said of the artists involved with the ZERO movement, 'Each one of us worked alone, experimenting with colour and light, or, in my case, the concentration of space in its relation to the sculpture and vice versa. All this went along with recognitions, perceptions, ideas and some intellectual effort.'

Though the ZERO group disbanded in the mid-1960s, that short period was critical for the development of Mack's practice. Experimentations with unconventional materials, light and kinetics saw the birth of his kinetic 'Steles'. Light played a central role in sculptures such as Stele with 9 Lenses (1964), which used glass lenses. Artworks from the early 'Stele' group also included motors to generate movement and variations of light and shadow.

Alongside these sculptures, Mack's abstract paintings were informed by his interest in light and darkness. The monochromatic and graphic play with black-and-white resin lines on cloth in Vibration (1957–58) exemplifies his penchant for Minimalism. Later, Mack turned to painting with pure, bright colours in a style that he called 'Chromatic Constellations'. Exemplary of this, the acrylic-on-canvas painting Empire Couleur (Chromatic Constellation) (2014) comprises stripes in a spectrum of colours and fragments that blend softly into one another at their edges. In such works, Mack creates different intervals, patterns, and sequences of colour that seem to float on constantly changing surfaces.

Mack has exhibited internationally since 1959 and his works are held in over 130 international public collections. In his early career, he participated in the historic II. documenta (1959) and documenta III (1964), as well as representing the Federal Republic of Germany at the Venice Biennale of 1970. Throughout his career, his multi-faceted artwork has been presented in almost 300 solo exhibitions, while a number of books as well as two films have been made about his practice.

Ocula Feature A Tale of Two Cities: the first Art Düsseldorf By Stephanie Bailey, Düsseldorf Düsseldorf, the capital of Germany’s most populous federal state and the economic heart of the Rhine-Ruhr region, has developed an identity as a ‘trade fair city’, with an excellent cultural scene that includes a long list of festivals and cultural institutions.

Read More Ocula Conversation Heinz Mack By Stephanie Bailey I don't accept this mentality that art is only available to a very small section of society that can afford it as a kind of luxury entertainment.