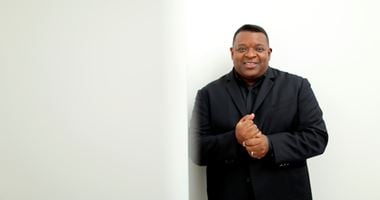 Isaac Julien began his career as an aspiring independent filmmaker while studying at Central Saint Martins in 1983, when he co-founded the Sankofa Film and Video collective with Martina Attille, Maureen Blackwood, Nadine Marsh-Edwards, and Robert Crusz. In his 2014 conversation with Ocula Magazine, the artist described his years with Sankofa as being instrumental in his later practice, providing the drive and creative atmosphere to push for recognition.

Isaac Julien is a pioneer of New Queer Cinema, highlighting black queer experience generally absent from mainstream films. Looking for Langston, which premiered at the 1989 Berlin International Film Festival, garnered critical acclaim for its seamless integration of documentary and fiction to examine American poet Langston Hughes and the Harlem Renaissance. In 1991, Julien won the Semaine de la Critique prize at the Cannes Film Festival for Young Soul Rebels: a coming-of-age thriller set in the 1970s in London and revolving around the murder of a Black gay man.

Colonisation and its ongoing legacy are common themes in Isaac Julien's work, as can be seen in Vagabondia (2000). The seven-minute film, which was nominated for the Turner Prize in 2001, follows a black female curator during a night inspection of Sir John Soane's Museum in London. Apparitions dwell about the premises, including Soane himself and a black male dancer whose presence perhaps references the colonial origins of the museum's collection.

The life and work of Brazilian modernist architect Lina Bo Bardi has been central to Isaac Julien's projects since 2012. Stones Against Diamonds (2015), presented at the 56th Venice Biennale, is a five-screen film installation inspired by a letter Bo Bardi wrote to her husband. In it, she explains her love for the organic beauty of uncut, semi-precious stones, which, in his film, Julien likens to the frozen landscape of Icelandic ice caves.

Stones Against Diamonds later developed into the film Lina Bo Bardi: A Marvellous Entanglement (2019), which combines elements of biopic with interlocking narratives characteristic of Julien's work to commemorate Bo Bardi. Filmed on site at some of Bo Bardi's most iconic works, among them the São Paulo Museum of Art, SESC Pompéia, and Teatro Oficina, Julien's film contemplates her use of vernacular materials and her vision of architecture as a social space.

Isaac Julien was appointed a Commander of the Order of the British Empire for services to the Arts in 2017, and was elected as a Royal Academician in the following year.

The significance of this moment in time is not lost on the artist and filmmaker Isaac Julien. The London-born son of St Lucien parents, Julien, 57, has spent much of his career exploring sexuality, r

What a show! Each section and, indeed, pretty much each individual in this rich but rigorous celebration of black artists working in the US in the 1960s and 1970s, could spin off into a separate exhib

Isaac Julien made his entrance into the art world in the late 1980s with his seminal film Looking for Langston, a contemplative celebration of black queerness. He was later awarded the Semaine de la

Sign up to be notified when new artworks and exhibitions by Isaac Julien are added to Ocula.
Sign UpLogin