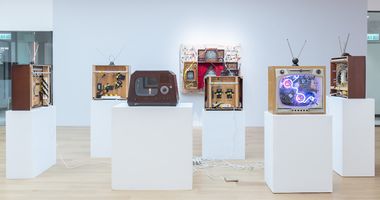 An innovator who brought the television to art, Nam June Paik is regarded as the progenitor of video art. An integral member of the art movement Fluxus, he masterminded, with artist Hans Haacke, an award-winning installation for the German Pavilion at the 45th Venice Biennale in 1993.

Nam June Paik was born in Seoul and fled the country with his family during the Korean War. By 1950, he was living in Japan and began his studies in aesthetics and musicology at the University of Tokyo in 1953. He continued his education in West Germany with the composer Thrasybulus Georgios Georgiades at the University of Munich, and at the International Music College in Freiburg with composer Woflgang Fortner.

It was at a summer school in Darmstadt that Paik met contemporary composers Karlheinz Stockhausen and John Cage. These meetings were to prove influential as Paik began to develop his avant-garde practice melding art and music.

In 1961, Paik joined Fluxus, an influential experimental community of artists, and had his inaugural solo exhibition at Galerie Parnass, Germany in 1963. Following his move to New York, Paik cemented his position as a pioneer and visionary. He created often sensational performances with his long-term collaborator Charlotte Moorman and worked with engineer Shuya Abe to build remote-controlled robots.

As his career progressed, Paik's interest in global communications developed. In the late 1970s, he staged his first satellite telecast, and took to working on an increasingly monumental scale throughout the 1980s and 1990s. Despite suffering a stroke in 1996, Paik adapted his ways of working and continued the drawing practice that had long been integral to his artistic process. Paik died in 2006 in Miami Beach, Florida.

His first use of the television in works such as Zen for TV (1963) positioned the technology as a material capable of delivering more than content. As he exclaimed in his 1969 manifesto, 'I want to shape the TV screen canvas as precisely as Leonardo, as freely as Picasso, as colorfully as Renoir, as profoundly as Mondrian, as violently as Pollock, and as lyrically as Jasper Johns.'

Paik's use of the object was multifarious. In TV Bra for Living Sculpture (1969), a collaboration with Charlotte Moorman, two television sets became the cellist's bra. In sprawling installations like TV Garden (1974–1977), the device seemed to grow from the branches of shrubs—Paik's way of showing how nature and technology could coexist. The television could be manipulated with magnets as in Magnet TV (1965), drawn upon, or taken apart and recomposed to form a robot.

Paik's commitment to the object and the form of communication it engendered paved the way for his ground-breaking live broadcast performances. In 1989, Good Morning, Mr. Orwell, a fast-paced, flickering stream of images and musical performances, was transmitted across five countries.

Nam June Paik's work has included some of the highest fetching video works at auction. Since his death, works have been offered more frequently, with his work Stag (1996) reaching US $590,301 at Seoul Auction, Hong Kong in 2017. His work Global Groove (1973) was minted as an NFT in 2021 and sold by Christie's.

Following a major stroke in 1996, [Paik][0], ambitious as ever, began to infuse his TV sculptures with notes of personal and spiritual reflection. He made sculptural video homages to artist friends an

Read More
Related Press Standing Up for Humanity in a World of Screens 1 November 2019, The New York Times

LONDON — One of Europe's leading museums has devoted its biggest show of the season to someone who saw the future more clearly than any artist of his century. He was a restless traveler and a keen st

Be among the first to know when new artworks and exhibitions by Nam June Paik are added to Ocula.
Sign UpLogin