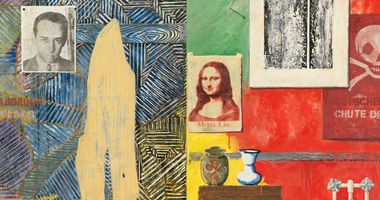 Perhaps best known for his somewhat irreverent American flag paintings and round targets, Jasper Johns is an influential and pioneering figure of 20th-century American art.

A contemporary of the post-war Abstract Expressionist movement and a compatriot of Neo-Dada, Jasper Johns' paintings, prints, and sculptures, which uniquely depict popular and banal subject matter, became antecedents for the American pop art movement.

Born in Augusta, Georgia, in 1930 and raised in South Carolina, Johns developed artistic aspirations from an early age. His art teachers at the University of South Carolina's Columbia campus, where he spent three semesters between 1947 and 1948, urged him to move to New York, which was fast becoming a capital of modern art. Doing so in late 1948, he attended countless exhibitions and studied at the Parsons School of Design in Greenwich Village for a semester before he was inducted into the U.S. Army for service in the Korean War.

After two years in the army, he returned to New York in 1953. There, while briefly attending Hunter College, he became friends with another Southern artist, Robert Rauschenberg, as well as modernist composer John Cage and choreographer Merce Cunningham, all of whom would have a profound influence on the artist's career.

Together, Johns and Rauschenberg would topple the dominant legacy of Abstract Expressionism, applying Duchamp's notion of the ready-made to their work, through the inclusion of banal everyday imagery and materials. This approach later earned their work the successive labels of 'Neo-Dada' and 'Proto-Pop'.

In 1954, dedicating himself to an ethos of original art, Johns destroyed all his previous drawings and paintings and began some of his early signature series, including his famous flags and targets.

One of the most well known of Jasper Johns' flags is Flag (1954–1955), where his idiosyncratic approach to subject and material is visible. As a familiar icon, the image of the American flag functioned as a 'found object' in his work. The image itself was painted with a mixture of paint and encaustic (that is, pigment and melted wax) on thinly concealed newspaper scraps. His style brought out the all-over composition of Abstract Expressionism, combining it with a relatively expressive but conscious and controlled style.

As with his targets and stencilled numbers, Jasper Johns' 'Flag' came in several flavours as he toyed with variations on the theme, including the monochromatic White Flag (1955), and the more three-dimensional Three Flags (1958).

Fast gaining attention for these artworks, in 1958 Johns had his first exhibition at New York's influential Leo Castelli Gallery, which received much critical acclaim. Not only did it earn his Target with Four Faces (1954) a place on the front cover of Art News that year, it also led to the acquisition of many of Johns' works by New York's Museum of Modern Art (MoMA).

Working with a range of quotidian imagery including flags, numbers, ale cans, targets, and maps, Johns sought to work with what he explained as 'things the mind already knows'.

Towards the late 1970s and 80s, these 'things' shifted from universal symbols to more personal and autobiographical references. He began to borrow imagery favoured by his own eyes, such as details of the Isenheim Altarpiece (1475/80–1528) by Matthias Grünewald or patterns of flagstone he had seen while driving. In contrast to his cool, detached early works, his series of intaglio prints on the theme of the four seasons made in 1987, also drew emotionally charged imagery directly from his memories and past.

Jasper John's art has a highly influential legacy and has gained much critical acclaim over the last 50 years. Alongside institutional exhibitions across the globe, his work has been the subject of several major retrospectives including at New York's MoMA in 1996, the San Francisco Museum of Modern Art in 2012, and the Whitney Museum of American Art and Philadelphia Museum of Art in 2020.

The still practicing artist currently splits his time between Connecticut and the island of Saint Martin in the Caribbean.

I want to start with one of the most obvious facts about Jasper Johns's painting, Untitled (2018), which is that the source is a photograph by the wartime correspondent Larry Burrows that originally

The eighth floor of the Whitney Museum of American Art, as David Breslin, the Director of the Collection, sees it, is 'a place for surprises.' The elegant spaces of the museum's top floor, catching

More words may have been written about Jasper Johns than about any other American artist who isn't Andy Warhol. Critical verbiage spumes in the wake of a sixty-some-year career (Johns is eighty-eight)

Like the Baltimore Museum of Art's books, Louise B. Wheatley's textiles and Pendelton's mixed-media ventures pack a punch (actually, hers is more of a lingering touch). With her, you don't see it comi

Sign up to be notified when new artworks and exhibitions by Jasper Johns are added to Ocula.
Sign Up Login