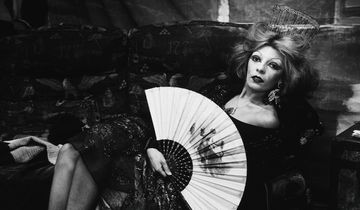 An icon of the bohemian scene in 1970s and early 80s New York, Peter Hujar is known for his subversive oeuvre of black-and-white photography. His countless square format works are direct, yet rendered with evocative tonal contrasts enhanced through his meticulous darkroom process. Among his subjects are scenes of death, the margins of New York's nightlife, cityscapes, landscapes, and intimate pictures of close friends and lovers.

Born to a waitress in New Jersey, Peter Hujar had a troubled upbringing that was marred by verbal and physical abuse. He left home at the age of 16 to live with his English teacher, the free-spirited poet Daisy Aldan.

In his free time, Peter Hujar soaked up the advice of some of the pioneers of his time. He attended 'Master Class' seminars taught by leading American photographers Diane Arbus and Richard Avedon. Arbus had been taught by Austrian-American street photographer Lisette Model, whose intimate street portraits served as another early influence for Hujar.

As his career developed, Peter Hujar influenced and was influenced by his contemporaries, who included Pop artist Andy Warhol and writers Susan Sontag and Fran Lebowitz. There was also mutual influence between Hujar and fellow artist and lover David Wojnarowicz, his long-time muse and companion. Hujar also influenced the work of younger contemporaries like Nan Goldin and Robert Mapplethorpe.

One of Peter Hujar's earliest bodies of artistic work are the photographs he took of the Palermo catacombs. Taken in 1963 on a visit to Italy, the series starkly and uncompromisingly presents the mummified inhabitants of the tombs. Mortality continued to persist as a theme throughout the artist's work. An example of Hujar's fascination with death is Candy Darling on her Deathbed (1973), a photograph of the titular transgender performer, then dying of lymphoma, striking a theatrical death pose in her hospital bed.

In 1969, Hujar also began to explore animals as artistic subject matter. Horse in West Virginia Mountains (1969) marked the first image in what became a long-running extension of Hujar's portrait photography.

Many of Peter Hujar's best known images were shown in Speed of Life, an exhibition that travelled across several European and American institutions and featured over 160 photographs taken between 1970 and 1987. As an insider to the bohemian scene of the time, Hujar's portraiture in this body of work captures a distinct period in New York's alternative cultural history, bookended by the Stonewall riots of 1969 and the AIDS crisis that claimed Peter Hujar's own life in 1987.

Hujar did not photograph these people as freaks or curiosities, but rather celebrated them as individuals pushing boundaries and embracing the freedom to be themselves. As Ocula Magazine explains, 'when heteronormative gender roles were blasted into televisions around the U.S.A., Hujar shone a light on those playing against the patriarchy.' Peter Hujar also famously documented the gay scene that was active around the piers on the Hudson, a cruising spot he himself frequented.

Within the Peter Hujar archive is an array of portraits of figures in the downtown creative scene. Alongside intimate pictures of close acquaintances, like Wojnarowicz, Sontag, and Lebowitz, one can find studio shots of Andy Warhol, Merce Cunningham, John Cage, William Burroughs, John Waters, Iggy Pop, and Kiki Smith, among others. Among these are also a number of Peter Hujar's self-portraits, which present the artist with the same playful but direct intimacy.

Beyond his intimate portraits, Peter Hujar's seminal body of work also includes brooding photographs of the countryside; dark Manhattan cityscapes; dilapidated structures, such as the derelict piers along the Hudson; and countless renderings of the waves of the Hudson River.

Peter Hujar's prints can be found in such institutions as the Tate London; Museum of Modern Art (MoMA), New York; the J. Paul Getty Museum, Los Angeles; Whitney Museum of American Art, New York; and the Art Institute of Chicago.

Although Peter Hujar, by choice, held few exhibitions during his lifetime, his work has since been the subject of several posthumous museum shows and retrospectives worldwide.

Read More Ocula Insight Hell is a Place on Earth: P·P·O·W Looks to History in Context of Covid-19 By Stephanie Bailey, London

Connections between Covid-19 and the HIV/AIDS crisis feed into P·P·O·W's online show.

The Armory Show is really just the weekend-long cherry on top of the splendid sundae that is the New York art scene and all it has to offer.

While a handful of Manhattan galleries have flocked south where Tribeca is emerging as a new cultural destination, it's the international blue-chips who are banking on Chelsea's staying power. The rec

As always, there are many wonderful exhibitions, film festivals, and art events taking place throughout the fall in New York. We've put together our recommendations, and hope that they encourage you t

‘A photograph brings me so much joy, they’re beautiful objects,’ says Sir Elton John, discussing a remarkable collection of 25 works by some of the world’s greatest photographers, to be offered at Ch

Read More Related Press The beasts within: Artists tap into their wild sides for a roaring show 26 November 2016, Wallpaper*

Rarely before have we seen such a long and varied list of contributors, as we do in Marian Goodman Gallery's group show Animality. The 'cast of creatures' ranges from dogs, camels, fish to octopi, and charts a history from George Orwell to Gabriel Orozco by way of Marcel Broodthaers. Curator Jens Hoffmann, never one to turn down a...

Sign up to be notified when new artworks and exhibitions by Peter Hujar are added to Ocula.
Sign Up Login