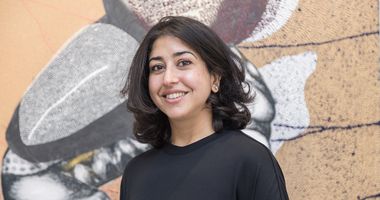 In her sculptural and two-dimensional works, Radhika Khimji explores ideas relating to the body and the fluidity of identity, while paying attention to the bodily experience of being in space.

Radhika Khimji studied in London, receiving her BFA from the Slade School of Fine Art (2002); Postgraduate Diploma from the Royal Academy of Art (2005); and MA in Art History from University College London (2007).

According to the artist's statement, Radhika Khimji's works are 'at once painting, a drawing and a collage' as well as 'an embroidery and a sculpture'. Employing various mediums, Khimji constructs intentionally ambiguous artworks that evade categorisation.

Khimji's ongoing concern with the body traces back to 'Shifters', a series of plywood works that take the form of fragmented bodies in movement. Also known as the 'Cut Outs', 'Shifters' in turn derives from an earlier series of collages that the artist began in 2002, which also revolved around human forms and gestures.

In 'Shifters', Khimji moved beyond the rectangular confines of collage to create anthropomorphic cut-outs from plywood. Resembling dancing or moving bodies, they are often covered in brightly coloured and intricate patterns, as seen in the three distinct forms of Squat (2005), or painted with lumpy forms evocative of human musculature, as in Sitting (2009).

The dot is a recurring motif in Khimji's work, which she describes as 'the visualisation of a human gesture' in her 2021 conversation with Ocula Magazine. In Right Leg Up (2008), for instance, the semi-translucent Plexiglas figure raises its leg up, from which emanates an orange and brown cloud perforated with dots made by burning holes into paper. Just as the act of raising a leg embodies the movement of a body in space, the holes or the cavities hint at the human gestures that created them.

Another recurring motif in Khimji's practice is the parachute, which the artist considers as a metaphor for 'an external drive' and commonly drapes over walls, buildings, or even rocks. In Safe Landings (2010), her first solo exhibition in Oman, Khimji installed parachutes across Barka Fort in addition to her cut-out works; the parachutes also made their way to Marrakech as part of the 6th Marrakech Biennale in 2016, where they appeared at the El Badi Palace. In presenting parachutes in different places, Khimji raises questions about whether the parachutes, in relation to the specificity of their site, can be read as symbols of hope or abandonment.

Radhika Khimji's work has been featured in numerous solo and group exhibitions as well as international art fairs.

In 2022, Khimji will present her work in Oman's first national pavilion at the 59th Venice Biennale.

Radhika Khimji joins curator and art historian Reem Fadda to discuss her work's exploration of the body as a fluid and transitory space.

Related Press At the Marrakech Biennale, a conversation between postcolonial identities 6 April 2016, Hyperallergic

MARRAKESH — Set outside the institutional white cube, in restored ancient sites and the ruins of a 16th-century palace, the sixth edition of the Marrakech Biennale, Not New Now, arrives like a breath of fresh air. Curated by Guggenheim Abu Dhabi Associate Curator Reem Fadda, the current edition of the Moroccan biennale creates a marvelous...

Sign up to be notified when new artworks and exhibitions by Radhika Khimji are added to Ocula.
Sign Up Login