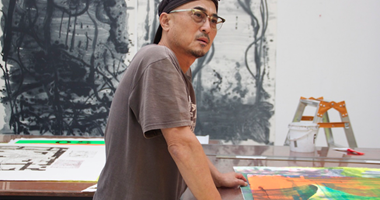 Shinro Ohtake is one of Japan's leading contemporary artists, with a multi-disciplinary practice that ranges across drawing, collage, sculptural assemblage, sound, and architecture.

The artist's experimental approach to artmaking is best encapsulated by his heavily collaged scrapbooks. Drawn from the debris of everyday life, they use found material to explore the impact of contemporary visual culture on the way experience is shaped, recorded and remembered.

Shinro Ohtake travelled to London at the height of punk in the late 1970s, where he encountered the movement's experimental ethos and influence throughout diverse areas of cultural expression that formed the foundation of his practice. The artist has also cited 20th century art movements Dada, Surrealism, and Pop Art as having been influential on his work, as well as the British painter David Hockney.

Shinro Ohtake began producing his scrapbooks in 1977, compiling them from materials collected along his daily experience. Viewed as a 'field for experimentation', as the artist said in his 2016 interview with Ocula Magazine, the scrapbooks trouble the distinction between painting, craft, and sculpture by combining material such as ticket stubs, maps, and posters with hand-painted elements.

Referring to his travels, dreams, and personal experience, the scrapbooks befit Ohtake's preoccupation with cultural ephemera as a form of self-documentation. In his work, using collected materials to form a personal narrative, the layers of the collage act as maps of memory and time.

This diaristic approach to assemblage extends to his more formally sculptural practice. Mon Cheri: A Self-Portrait as a Scrapped Shed (2012), exhibited at dOCUMENTA 13, explicitly employs sculpture and collage as a form of self-portraiture. The multimedia assemblage, located within a prefabricated shed, is a disorienting mix of paper material, objects, and sound, speaking to the intense physical and temporal experience of contemporary visual culture and its relationship to identity formation.

Shinro Ohtake's broad material practice and disregard for disciplinary divides also informed his architectural project on the Japanese island of Naoshima. Completed in 2009, the I Love Yu Bath House is a functional public bathhouse that combines architectural pastiche, sculpture, and collaged images, including a collage of erotica lining the tiles of the bath. Staged within the traditionally communal space of a bathhouse, Ohtake's work represents popular culture as a space of collective memory that, much like the visual fragmentation of the structure's stylistic elements, is both multi-layered and constantly shifting.

Shinro Ohtake has held mid-career retrospective exhibitions including Shinro Ohtake Zen-Kei: Retrospective 1955–2006 at the Museum of Contemporary Art Tokyo (2006), and Ohtake Shinro: New Universe on the Road at Hiroshima City Museum of Contemporary Art and Fukuoka Art Museum (2007). His work was featured in the 8th Gwangju Biennale (2010) and a selection of his scrapbooks was shown in the group exhibition Encyclopaedia Palace at the 55th Venice Biennale (2013).

In addition to visual arts, Ohtake is also known for his contributions to Japan's experimental music scene with his noise band JUKE/19.

I think everyone has their own map and the map has many layers; it's an accumulation of time.

Duddell’s, the restaurant and bar which has also become one of Hong Kong’s most important art spaces, recently collaborated with London’s Institute of Contemporary Arts (ICA)

Paper-Sight is the first solo exhibition in Singapore by Japanese artist Shinro Ohtake, currently on at STPI in Singapore. The show features 30 of nearly 140 works that were produced during the artist’s prolific residency at STPI in late 2015. His multimedia practice, relatively unknown outside Japan, is difficult to describe: a painter...

Read More
Related Press The other side of history 23 August 2016, Hyperallergic

One of the fascinating things about The Keeper, organized by Massimiliano Gioni, with Margot Norton, Natalie Bell, and Helga Christoffersen for the New Museum (July 20 – September 25, 2016), is the sheer number of distinct collections they managed to include in a space that is not particularly hospitable to art. Originally, I went there to...

You call it collecting. I call it hoarding. The New Museum calls it art and has a captivating exhibition devoted to it. Titled The Keeper,  the show fills three floors and a lobby gallery with hundreds of thousands of mostly small objects and images gathered, sorted, arranged and recorded by some 30 retentive artists — keepers —...

In this age of ghoulish hoarder reality shows and the canonization of Marie Kondo, an era in which we’ve made a virtue of minimalism and simplicity, of culling for culling’s sake, of organizing and curating (by which we really just mean paring down), The Keeper,  the sprawling just-opened exhibition at New York City’s New...

Sign up to be notified when new artworks and exhibitions by Shinro Ohtake are added to Ocula.
Sign UpLogin