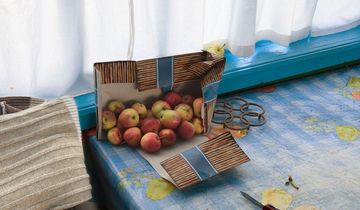 Stephen Shore is an American photographer who is known for his large-format colour photographs of everyday life in the United States. He is considered a pioneer of coloured art photography. Shore's photos sit in a trajectory of photography alongside works of other artists, such as Robert Frank, Walker Evans, Martin Parr, and Bernd and Hilla Becher.

Shore was born in New York City. The artist's interest in photography began at the age of six, when he received a darkroom kit as a gift from his uncle. When he was nine, he was given a 35mm camera, which he began to use immediately. From a young age, his photographic practice was inspired by Walker Evan's work, in particular Walker's photobook American Photographs (1938).

By the age of 17, Shore had met Andy Warhol and began to regularly visit his studio, the Factory, to photograph Warhol's friends and artworks, as well as other artists. A few years later, Shore hosted his first exhibition at the Metropolitan Museum of Art in New York, where he displayed a series of early black-and-white photographs.

Throughout the early 1970s, Shore embarked on a number of road trips across the United States with a 35mm camera, 4x5 view camera, and an 8x10 format camera. Sometimes referred to as his 'on the road' photographs, Shore took colourful shots of the everyday American aesthetic as he observed the streets and cities he passed through. Shore's photo-diary depicts unremarkable experiences and commonplace objects in everyday settings.

Although some critics initially regarded Shore's work as ordinary, his unique eye recognised the photographic possibility of the vernacular American landscape. Despite being dismissed at the time, 'American Surfaces' is regarded as an important series of work and established Shore as a pioneer of colour photography in art from the 1980s onwards.

'Uncommon Places' (1982) is a series of work depicting unremarkable American landscapes. Shore photographed 'Uncommon Places' on a large-format 8x10 camera. The size of the camera meant Shore couldn't move it easily, requiring him to remain extremely focused while shooting. He took roughly 20 minutes to compose and shoot each photograph in this series.

'Uncommon Places' documents imagery of Northern American highways, dirt roads, billboards, and gas stations. There are 61 photographs in the series, taken over a decade of travelling cross-country across the United States.

Shore's vibrant photographs captured a snapshot vision of America that portrays beauty even in mundane environments. Shore's series 'Uncommon Places' contributed to the establishment of colour photography as a recognised art form.

In 2002, Shore published a book titled Uncommon Places: Unpublished Photographs 1973—1978. The book was published by Galerie Conrads in Dusseldorf and features over 80 photographs by Shore.

Stephen Shore has exhibited in solo and group exhibitions across the world.

Shore's photographs are included in the collections prestigious galleries and museums, including The Metropolitan Museum of Art in New York, Canadian Centre for Architecture (CCA) in Montreal, The Victoria & Albert Museum in London, The Museum of Fine Arts in Boston and The Getty Center in Los Angeles.

The photographer Stephen Shore has two little dogs that he walks every day, lead in one hand, camera in the other. The thing with dogs, he says, is that, as you walk them, you're often looking down. '

The wall text that introduces Stephen Shore's retrospective at the Museum of Modern Art, which features of 50 years of chronologically-arranged photography, states, puzzlingly, that Shore's images 'se

The restless manner in which Shore tested the boundaries of his discipline is at the heart of the exhibition.

Read More Related Press Photography Is An Art And Always Will Be 13 December 2014, Sean O'Hagen for The Guardian / 11 December 2014

Imagine, if you will, the following scene. I pop into the National Gallery to view the 2014 BP National Portrait Award and look in bemusement at the exhibition, which is mostly comprised of rather old-fashioned paintings. It’s an uninspiring show, a hotchpotch, as are most exhibitions drawn from open submissions. Inexplicably enraged by this...

Sign up to be notified when new artworks and exhibitions by Stephen Shore are added to Ocula.
Sign Up Login