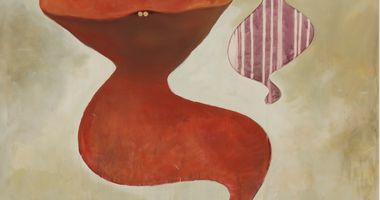 Dropping out of art school in 1990 to pursue graphic design, Gokita's early career was spent as a designer until he returned to painting and drawing around the mid-1990s. His work, inspired by 1960s and 70s Japanese and American subcultures, found popularity in the Japanese music and fashion industries, but he found himself fatigued by the client-designer dynamic of the work.

Gokita's works from the late 1990s were largely executed in charcoal and ink. Later works saw his practice head in an increasingly painterly direction that shed the more specific signifiers of his source media. Though a figure is still discernable in paintings like Half Nelson Courtship (2012), such canvases exemplify the artist's focus-shift towards a more abstract visual language.

Drawing stylistic inspiration from a broad field of Japanese and European artists, Tomoo Gokita's work is often heralded as a successor to New York's 1980s Neo-Expressionists. Clear influences of Surrealism and German post-war Expressionism are visible in his contorting and sometimes jarring treatment of figures. Works such as Uncovering Method (2008) for example, present a figure as a series of organic and monochromatic half-circles, skin seemingly bubbling with movement.

Combining abstract and expressive brushwork, deformed figures, and lowbrow imagery in sultry black and white, Gokita's seminal works are emotionally and psychologically charged canvases. In Scorn (2011), the melancholic seductiveness of the grayscale bust of a woman sporting a dress and 1960s-style hairdo is balanced by a face obscured by scraping and gouging.

Tomoo Gokita's artworks in their broad cultural explorations have quickly fostered a wide global audience. The artist held his first North American solo exhibition in New York in 2006 and has since exhibited in group and solo shows across the globe. His work can also be found in several prominent collections, including those of the High Museum of Art, Atlanta; the Marciano Art Foundation, Los Angeles; and X Museum, Beijing.

Tomoo Gokita is an outsider among Tokyo art insiders. With his boyish charm, he is sociable yet reticent. He regularly declares his love for beer and professional wrestling—particularly the 1976 match between Japan’s Antonio Inoki and American champion boxer Muhammad Ali. He studies record-album covers rather than art catalogs. So when...

Sign up to be notified when new artworks and exhibitions by Tomoo Gokita are added to Ocula.
Sign Up Login