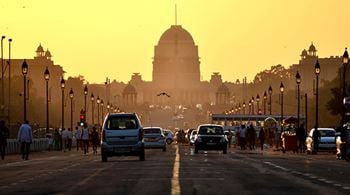 New Delhi, known as India's bustling capital and known for its luscious gardens and rich historical sites, can perhaps also now be known as the main centre for contemporary art in India. The city is home to India Art Fair: India's largest modern and contemporary art fair, with a mission to engage with the cultural history and development of the South Asian region. Established in 2008, the fair is split into sections dedicated to galleries; institutions; solo artist presentations; emerging artists and practices from South Asia; and large-scale, interactive installations.

New Delhi, however, has a history of modern and contemporary art institutions. Established in 1954 and with branches in Mumbai and Bangalore, the National Gallery of Modern Art (NGMA) was inaugurated with an exhibition on sculptures despite being most known for its collection of renowned artist Amrita Sher-Gil's paintings. The gallery's collection includes over 170,000 works by over 2,000 artists and includes paintings, drawings, sculptures, prints, installations, and, more recently, photographs. The collection mainly consists of Indian artists. Standout sculptors include D.P. Roy Chowdhury, while notable photographers include Raghu Rai. NGMA also showcases international artists, with past exhibitions featuring works by artists such as Pablo Picasso.

For even more modern and contemporary art, you can visit the Kiran Nadar Museum of Art (KNMA), established by Kiran Nadar in 2010. The first private museum of modern and contemporary art exhibitions from India, the KNMA showcases 20th-century Indian painters and Modernist works from both pre- and post-Independence India. Notable artists included in the collection and shows are Nasreen Mohamedi, Arpita Singh, Adeela Suleman, and more. While KNMA is known for its modern and contemporary works from India, the museum also displays international works, such as a previous exhibition on Bauhaus, and older works, such as Indian miniatures. Galleries and non-profit organisations, however, may be the best spots for more contemporary works—and New Delhi is not lacking in either. Notable spaces of this kind are DAG, Exhibit320, and Khoj International Artists' Association.

The city's main and historical art attraction is the National Museum, New Delhi, which is filled with 200,000 works spanning over 5,000 years. The collection includes both pre-historic and modern works of art. An exhibition of Indian art and artefacts by the Royal Academy of Arts in London was shown in India before the works were returned to their respective museums in 1949; the exhibition's success in India led to the establishment of the Museum. The rich collection is categorised in the following sections: Anthropology, Archaeology, Decorative Arts, Jewellery, Manuscripts, Paintings, Pre History, Numismatics & Epigraphy, Central Asian Antiquities, Pre-Columbian & Western Arts, Arms & Armour, and a section entitled Anubhav—a tactile gallery that is aimed particularly at visitors with disabilities.