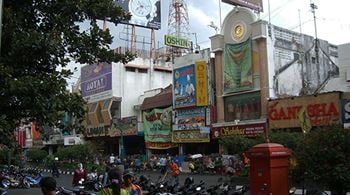 Yogyakarta, often affectionately called Jogja, is one of the most significant artistic hubs in Indonesia. It is the only city in the country—a vast developing nation still ruled by a monarchy—and has been considered an important centre of traditional Javanese art and culture for centuries. Diverse and dynamic, it contains a bustling creative community of cross-generational and multidisciplinary artists. It is located on the south coast of Java, which is also a thriving tourist destination.

Scattered around Yogyakarta are centres of visual arts such as Cemeti Art House, founded by artists Nindityo Adipurnomo and Mella Jaarsma in 1998. Cemeti focuses beyond exhibitions, art projects, and residencies by organising performances, discussions, and artist talks involving both Indonesian and international contemporary artists, curators, activists, and writers.

Not too far away from Cemeti Art House stands Yogya Art Lab (YAL). Since its establishment in 2012 YAL has been an experimental and progressive platform for artists to work together and produce works across various mediums in order to expand their practices. YAL—a foundry and production house—is an exceptional initiative by Singapore-based Gajah Gallery. Gajah Gallery has been a leader of the Southeast Asian art scene since 1996, and represents the region's influential and emerging contemporary artists.

Yogyakarta is also renowned as a centre of Indonesian education, and is home to a large student population. The Institut Seni Indonesia (Indonesian Institute of the Arts) in Yogyakarta is a prominent state university whose programmes includes visual, performing, and media arts, and alumni include prominent Indonesian contemporary artists such as Nyoman Masriadi, Entang Wiharso, and Heri Dono.

Culturally and historically, Yogyakarta is a gathering point for a variety of art practices, such as dance, drama, literature, music, performance, textile, and visual arts. It is only natural for the city to host the annual ART|JOG, an international contemporary art festival showcasing a variety of interdisciplinary arts.

Yogyakarta is the birthplace of several contemporary art collectives, including Jendela Art Group, which was founded in Yogyakarta by some of Indonesia's leading contemporary artists: Jumaldi Alfi, Rudi Mantovani, Yusra Martunus, Handiwirman Saputra, and Yunizar. Taring Padi is a collective of underground artists who are well-known for the political messages of social justice embedded in their artwork, with woodcut on paper as their main medium. These collectives have participated in numerous group and solo exhibitions in Indonesia as well as globally in Hong Kong, Singapore, and Australia.

Yogyakarta is home to many contemporary Indonesian artists' studios, including those of Eko Nugroho, indieguerillas, Angki Purbandono, and Wedhar Riyadi, among others.