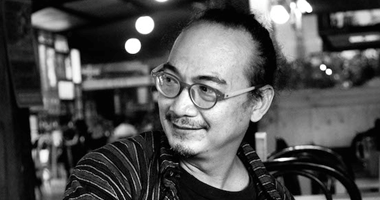 Growing up in Indonesia under Suharto's regime, Heri Dono adopted humour as a strategy to subvert power structures. As he told Ocula Magazine in 2015, artists, for him, can act like the clown or the servant in traditional theatre: easily overlooked characters who 'can say anything because they are considered stupid.'

Influential to Heri Dono's art practice has been wayang kulit, which combines visual art, music, and storytelling to disperse Javanese myths and Indonesian history. The artist considers the puppet theatre as a space for social interaction and education, and often incorporates its elements into his work. For example, Semar—a clown in Javanese mythology and a popular character of wayang—is a frequent protagonist in Dono's paintings and batik fabric works.

Dono's knowledge of traditional theatre is the result of his one-year training with a master puppeteer in 1987, after he dropped out of the Indonesian Art Institute. The artist said that his work was 'rejected' in art school because he was working outside the then-accepted medium of painting.

Angels are among the recurring protagonists of Heri Dono's artworks, used to symbolise the spirit. In the installation Flying Angels (1996), for example, angels made of fibreglass, fabric, and bamboo are suspended from the ceiling; equipped with electronic devices, they flutter their wings when switched on. Angels similarly take flight in the 2014 paintings The Flying Angels I and II, in which they appear with jet-black bodies and the heads of young women.

In The Flying Angels I and II, an illustration of an open window showing the blue sky is visible on each angel's chest, conveying hope in contrast to the smog-covered sky in the background. In 2016, Heri Dono's works featuring angels were brought together in his solo show Angel's Exodus at Tang Contemporary Art, Bangkok.

Heri Dono has addressed environmental deterioration in his work, often identifying authorities as key players in exacerbating the situation. In Blooming in Arms (1996), presented at Oxford's Museum of Modern Art, hybrid man-tree figures carry guns in reference to the Indonesian government's policy of the era that encouraged civilians to plant trees while neglecting to regulate the corporations that deforested the jungles of Kalimantan and Sumatra.

Nature itself is at war with humans in Heri Dono's painting Weapon's Creature Shoot the Mother Earth (2016), in which an alien-like manifestation of nature is pitted against a machine. Representing Indonesia at the 56th International Art Exhibition of the Venice Biennale, the artist examined the intersections between globalisation and legacy of colonisation in his solo exhibition Voyage-Trokomod.

For Trokomod—the centrepiece of Voyage-Trokomod—Heri Dono merged the forms of the Trojan Horse with the Indonesian Komodo dragon to create a hybrid 3.5-metres-tall 'vehicle' that visitors could walk inside. Other works on view included cannon-shaped telescopes, which turned the observer's gaze onto culturally significant artefacts of the Western world, and suspended Perahu Arwah (Spirit Boats) with angel-like wings.

Land of Freedom (2017)—Heri Dono's first solo gallery exhibition in Hong Kong at Tang Contemporary Art—commented on contemporary politics, namely Brexit and the election of Donald Trump to the United States presidency. The American president appears as a superhero in Super Trump—Land (2017); however, upon closer inspection, Dono's sarcasm becomes evident in the replacement of the 'S' symbol with a cartoon bird and the use of colour black, which denotes anger in wayang.

Born in 1960 in Jakarta, Heri Dono is unquestionably one of Indonesia’s most highly regarded contemporary artists, developing a distinctive style early on that came out of an exploration

While summer is generally known for being a slow time in the world art calendar, June in Tokyo proved to be one of the busiest months of the year, with the opening of the first Japan outpost of Galeri

Semar, the grotesque dwarf, capers among men and gods, confounding both good and evil. His absurdist antics (which include habitual farting) are legendary; yet he is a wise and powerful protector, bringing about balance in the midst of strife. Semar, along with a host of heroes and demons, appears in wayang kulit or traditional Javanese...

Heri Dono is best known for his wildly imaginative installations of strong visual commentaries that explore sociopolitical issues and human behavior, such as the notable Voyage – Trokomod at the 56th Venice Biennale (2015). Zaman Edan (The Age of Craziness) is the Indonesian artist's latest explorations in print and paper at STPI...

Be among the first to know when new artworks and exhibitions by Heri Dono are added to Ocula.
Sign Up Login