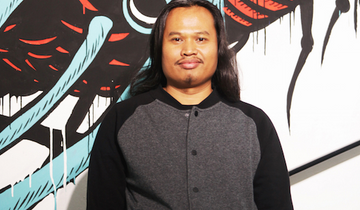 Eko Nugroho is known for his reinterpretations of traditional Indonesian media and techniques, fluidly combined with a stylised aesthetic evocative of comic books. Employing humour and vivid colours, Nugroho's embroidered paintings, sculptures, community collaborations, and performances examine the socio-political climate of Indonesia and the contemporary urban environment of Yogyakarta, where he is based.

Eko Nugroho enrolled in the Painting Department of the Indonesian Art Institute, Yogyakarta, in 1997—a year before the authoritarian regime of Suharto came to an end. In the following years, known as the Reformasi era, Nugroho experienced first-hand the major waves of transformation across Indonesia, including greater freedom of expression and the import of Western comics and Pop art aesthetics that allowed for an explosion of experimentation in the arts.

Emerging from such a background, Eko Nugroho's practice draws from both traditional and contemporary sources, as well as Indonesian and Western ones. He has reinterpreted wayang—a traditional form of shadow puppetry—in a number of his works to discuss historical and present-day events in Indonesia. In God Bliss (In the Name of Semelah)—a one-and-a-half-hour puppet play commissioned by New York's Asia Society in 2017—for example, Nugroho traces the history of Islam's spread in Java.

Eko Nugroho also incorporates traditional techniques like embroidery and the dyeing process known as batik into his work. Since 2007, he has worked with a small village to create embroidered paintings characterised by enigmatic and humorous scenes executed in bold colours. In his 2015 interview with Ocula Magazine, Nugroho said of the artist's unique position in society that 'the work of the artist will always be interesting if the artist situates themselves in their immediate context and records and interprets what happens around them.'

The masked figure is among the most recognisable motifs in Eko Nugroho's work, which symbolises a human being's duality and the process of concealment. In We are What We Mask—his solo exhibition at STPI in Singapore (2013)—Nugroho presented, among other items, cast paper masks (Love, Ego, Money, 2013) and wearable pieces (Do We Know Ourselves?, 2013) that echo the masked figures in paintings and drawings like Norm Normal (2018).

Art occurs within, around and in direct contact with a broad range of groups: the art market, collections, museums, foundations, independent spaces, festivals, biennials and all sorts of other collaborations.

I cultivate lots of projects that are rooted in working with community and this makes me really happy. I always receive a lot of creative energy from this practice. It's a big source of inspiration for me.

Asia Now returns to Paris with an exciting lineup of 250 artists from Asia's contemporary art scene.