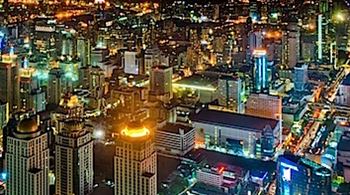 True to its reputation as one of the world's most visited cities, Bangkok has much to offer all around: food, nightlife, shopping, and art. On the way into the city from Dong Muang International Airport, you might drop in at the Museum of Contemporary Art (MOCA Bangkok) for a comprehensive view of traditional and contemporary art emanating from Thailand. Based on the tremendous collection of businessman Boonchai Bencharongkul, who gifted the works to the institution in 2012, the Museum boasts the works of Thai national treasures—among them Chitt Chongmangkong, Yangyong Olarachin, Waranun Chutchawantipakorn, and Decho Buranabanpot—and emerging talents in its spacious galleries. MOCA Bangkok is also noted for its Thai banknote collection, the most complete of its kind in the country.

At the heart of the city, the Bangkok Art and Culture Centre (BACC) is known for its acclaimed range of contemporary art in design, music, theatre, and film. Established in 2008 with the initiative to kindle passion and inspiration for art in local and international visitors alike, the BACC is known for its forward-thinking exhibitions, public events, and programmes. It is the host of the Young Thai Artist Award, the Mekong River Art Project, and the prestigious White Elephant Art Award; in 2018, the Centre was one of the 20 venues to participate in the inaugural Bangkok Art Biennale. A similarly leading presence in the social arena, the BACC is due to open the second (and largest to date) LGBTQ exhibition in Asia in November 2019.

In addition to the BACC, the venues of Bangkok Art Biennale 2018 encompassed the major landmarks throughout the city, notably the Peninsula Bangkok Hotel, O.P. Place, Siam Square One, and Siam Paragon. With 200 works by artists from 33 countries, highlights included Yayoi Kusama's famous hanging pumpkins with polka dots; Huang Yong Ping's mixed media installations; Yuki Kihara's video installations; and a range of Thai artists such as Wisut Ponnimit, known for his Mamuang cartoon illustrations. After a critical success, Bangkok Art Biennale is due to return in 2020.

From BACC, take the public BTS Skytrain to 100 Tonson Gallery, a leading contemporary art space that became the first Thai gallery to feature in Art Basel Switzerland in 2011. Its growing roster of artists include locals such as Araya Rasdjarmrearnsook, Chatchai Puipia, and Montri Toemsombat, with works of Yayoi Kusama, Andrew Stahl, and Louise Bourgeois among others, in its collection. From there, head over the Bangkok CityCity Gallery in the nearby Sathorn district, the city's commercial centre, for its diverse range of paintings, sculptures, installations, videos, and live performances.

For a more relaxed, informal but serious encounter with art, WTF Gallery and Café in Khet Watthana might just be the place for you. The brainchild of an art curator, a hotelier, and a photojournalist, WTF Gallery and Café is a three-storey hangout place with a cocktail bar and café on the first two floors and an exhibition space upstairs.