Established as an artist-run gallery in 1983, Artspace Sydney has become a driving institution for experimentation and development in Australian contemporary art, with an emphasis on supporting living artists.

A publicly funded combined public gallery, studio, and collaborative interdisciplinary working space, it allows for the presentation of new and innovative contemporary art in an engaging, critical environment outside of mainstream-artist-oriented institutions such as art galleries and commercially driven dealerships. Headed by a rotating two-to-four-year directorship chosen alternatingly by artists and the board, ideas and approaches are consistently refreshed.

Initially operating from a temporary location in Surrey Hills, Artspace’s first major exhibition in 1983 was A Different Perspective, curated by Terence Malone. Over the next three years the institution presented the work of several major Australian artists who were then just emerging, such as Michael Riley, Mikala Dwyer, Rosemary Laing, and the late Turkey Tolson Tjupurrula. In 1993 Artspace relocated to its current iconic home: the Gunnery. The Gunnery is an historic multi-storey warehouse in Sydney’s Woolloomooloo waterfront neighbourhood; national, state, and local governments, along with philanthropists such as Franco Belgiorno-Nettis, raised AUD1.5 million to redevelop the run-down location as a centre for innovation, experimentation, and collaboration in Australian contemporary visual art.

Artspace remains steadfast in its mission of supporting emerging artists and practices, both from Australia and overseas, providing grants, artists residencies, commissions, and connections with prominent writers and curators through its range of programmes. Such programmes include One Year Studios, International Visitors, the Bureau of Writing, Ideas Platform, and the Future Fund for Living Artists. Moving into the contemporary digital age Artspace has launched a number of online initiatives; one of the most ambitiously scaled of these is 52 Artists 52 Actions (2019) in which 52 artists from 31 countries were commissioned to perform and record actions in locations across the Asia-Oceanic region, to be shared online with a global audience.

For over 20 years artists in the early days of their career have occupied the studios and gallery spaces at the Gunnery through programmes such as the NSW Visual Arts Emerging Fellowship (held at Art Space since 1994) and individual exhibitions. Artspace has played a role in the careers of many Australian and international artists, and the early years in Surrey Hills saw major presentations from artists such as Banduk Marika, Tracey Moffatt, John Nixon, Rosemary Laing, Mikala Dwyer, Christian Boltanski, and Annette Messager. From its more permanent home at the Gunnery, artists such as Simryn Gill, Patricia Piccinini, Marco Fusinato, Mike Parr, Vernon Ah Kee, Chicks on Speed, Richard Bell, Khadim, and Justene Williams have been given greater attention from the Sydney art scene.

Beyond the gallery space itself, Art Space is involved in a range of exhibitions, art events, and initiatives. A national touring programme of Artspace artists is run in collaboration with Museums & Galleries across New South Wales. Artspace also supports and commissions artists for various works for other events and institutions, such as Justene Williams’ work for Performa 15 (New York, 2015) and Ramesh Mario Nithiyendran’s Idols (2018) for Dhaka Art Summit. 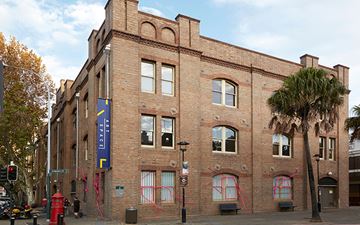 Read More Ocula Conversation Brook Andrew Reflects on 'This Year' By Alexie Glass-Kantor, Sydney Published in partnership with Roslyn Oxley9 Gallery, Brook Andrew reflects on his trajectory as an artist.

Read More Ocula News Who Was Awarded the 2020 NSW Visual Arts Emerging Fellowship? Sydney, 12 November 2020 The winner of the $30,000 opportunity was chosen from eight finalists.