Double Square Gallery is delighted is present Su Hui-Yu's solo exhibition, The Women's Revenge, which will run from 31 October–12 December 2020. Following Su's previous exhibition at Double Square Gallery five years ago, the exhibition adopts the same title of his latest work and continues his exploration of issues related to the body and life politics in recent years. The artist reimagines Taiwanese films featuring the motif of women's revenge in the 1980s, and incorporates his childhood memory of watching these films, creating a newly conceived revenge plan in 2020 after much self-exploration and creative search. The Women's Revenge is accompanied by an essay written by Julian Ross, curator of the International Film Festival Rotterdam (IFFR). Carrying on with the Light Year Project, a special collaboration between Double Square Gallery and Samsung, the exhibition will be shown with five 82-inch TVs hanging from the ceiling in the gallery space, immersing the audience in the artist's world of revenge characteristically informed by violence, eroticism, bloodshed and special effects. This work will also be published as a multi-channel installation, a short film and a performance. After its debut as a multi-channel video at Double Square Gallery, the film and performance will be subsequently shown at various international film festivals, Digital Art Center Taipei and 1646, a contemporary art space in Hague, the Netherlands.

Su has been utilising the approach of 're-shooting' in recent years to create his works, gaining new insights into or unveiling more active historical perspectives about past histories that are unfinished, banned and misunderstood. His previous works revolving around the subject matter of the body include Super Taboo (regulated male sexuality), The Walker (non-mainstream body), The Glamorous Boys of Tang (atypical and queer body) and The White Waters (gender politics and interspecies fantasy). In The Women's Revenge, Su persists with his creative concept of 're-shooting' to reconfigure Taiwanese cinematic history and retrieve the latent collective memories, once again producing a fantasy as well as an adventure about the body, history and ideology.

Prior to Taiwan's lifting of martial law, a group of films influenced by the European wave of exploitation movie was produced in the 1980s, including Never Too Late to Repent, Woman of Wrath, On the Social File of Shanghai, Woman Revenger and Queen Bee. This filmic genre featuring the motif of 'women's revenge' would usually portray some severely oppressed heroines before culminating in bloody plots of vengeance. In continuation of Su's creative context of 're-shooting' in recent years, The Women's Revenge uses Taiwanese exploitation movies as a starting point to reexamines the problems of body regulation, seeking social novelty, modern discomforts and mediatised body. It also discusses how plots based on feminism have been turned into exploitation movies, reflects on the misunderstanding and exploitation of female sexuality in the system of image, and exposes how the contemporary body is manipulated by image technologies.

For the artist, these films point to a black-hole in history, in which a mixed bunch of images devours possible clues to explore the life politics of an entire generation. Formally speaking, the artist also takes part in the violent vengeance upon men by transforming himself into one of the avenging women – the box office guarantee for the 1980s Taiwanese cinema and the Best Leading Actress of the 20th Golden Horse Awards, Lu Shao-Fen, with a peculiarly proportioned body – through makeup and the technology of deepfake. The transformation also symbolises an attempt to understand and experience women's world with a man's body. 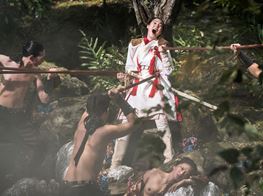 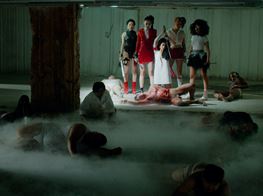 Related Press Why most people think sex is all about desire? 'Your history and culture impact more': Interview with Su Hui-Yu 11 December 2020, The Art Press Asia 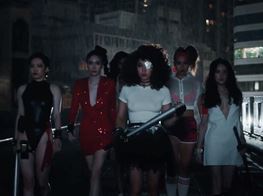 Sign up to be among the first to know when new exhibitions by Su Hui-Yu or at Double Square Gallery open.
Sign UpLogin