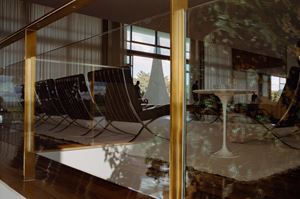 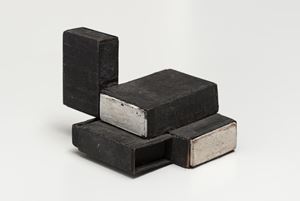 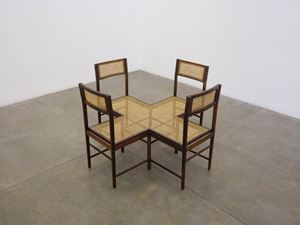 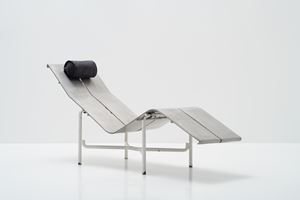 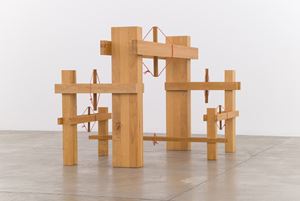 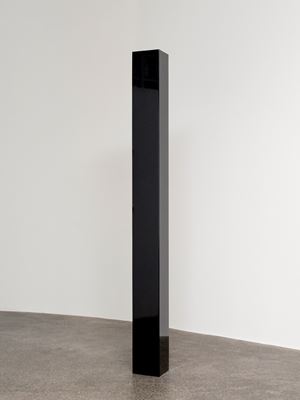 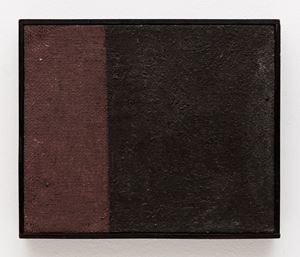 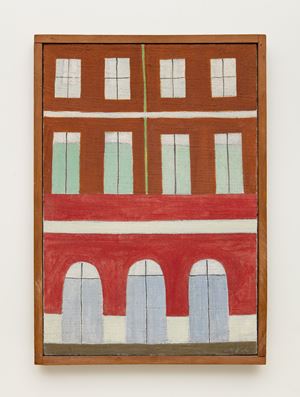 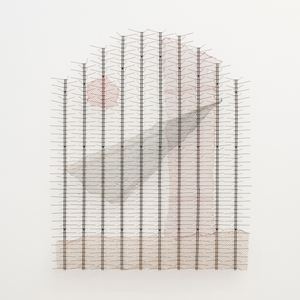 Bergamin & Gomide and Fortes D'Aloia & Gabriel are pleased to present AAA—Anthology of Art and Architecture. Curated by Sol Camacho—urbanist, architect, Principal at RADDAR Architecture and Cultural Director of Instituto Bardi / Casa de Vidro—the show features more than 100 works by Brazilian artists, architects and designers, proposing a reflection on the social function, methods and history of architecture.

Through a timeless and decategorising selection, AAA navigates the field of visual arts—with paintings, sculptures, and videos—and architecture—with scale models, pieces of furniture and photographs of buildings. These works feature architecture as a vocabulary: be it in the relation between the construction of spaces and its representation, in the use of civil construction materials, or in the subversion of language itself as a resource for experimenting with scale, composition and geometry.

Based on those relationships, the curator established architectural elements to define categories for the exhibition, the first of which consists of Blocks, Pillars, Walls and Surfaces, grouping the works that deal with components of the constructed object. Blocks includes works formed by solid and modular units, such as the Estruturas de Caixas de Fósforo Preto/Branco [Matchbox Structures Black/White] (1964), by Lygia Clark, along with the design for MASP, present in the show by way of a maquette produced by the Instituto Bardi for the exhibition held that marked the building's 50th anniversary. The PMR Chaise Long (1985) by Paulo Mendes da Rocha and Ponto [Stop] (2015) by Iran do Espírito Santo are part of the Pillars subgroup, exploring elements of suspension and support. Walls as incorporated by artists André Komatsu and Ivens Machado analyses the issue of public barriers, which are as essential to architecture as they are controversial within the Brazilian sociopolitical context. The fourth subgroup is Surfaces and is made up of works by Lygia Pape, Athos Bulcão, and others, dealing with abstraction, angulations and folds.

Subtraction, Transparency and Color form a second category, dealing with the formal operations at stake in certain works that are entirely divorced from the representation of a specific object. Subtraction is considered as the action resulting in the configuration of spaces on the basis of emptiness—a resource present in the projects of spbr arquitetos, as well as in the series 'Quadroquadro' (2013–2016) by Renata Lucas. Works by Mauro Restiffe and Joaquim Tenreiro explore Transparency. Color, on the other hand, is a tool for decoding space created in the tapestries of Burle Marx and in paintings by Marcelo Cipis.

In the field of the representation of spatial concepts, works by Valeska Soares, Rivane Neuenschwander and Oscar Niemeyer are part of the Interiors subgroup, dealing with the concept of familiarity. Its counterpoint is the Façades subgroup, which explores architecture based on its relationship with the urban context, as in Janela [Window] (2018) by Rodrigo Matheus, and in paintings by Volpi and Lorenzato.

AAA – Anthology of Art and Architecture is an unfolding of Exhibit AAA—a special project developed for Bergamin & Gomide's stand at Expo Chicago in 2019. While in its first version curator Sol Camacho sought to create a 'small atlas' of Brazilian art and its close relationship to architecture, the current topographical depiction is presented as an anthology. A plural collection of themes, temporalities and languages materializes in a bold exhibition design formed by modular structures that operate as a synthetic landscape.

AAA – Anthology of Art and Architecture

10 new artworks have recently been added by Fortes D'Aloia & Gabriel.
Sign up now to be among the first to know when new artworks are added.