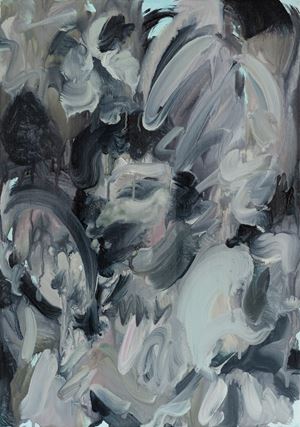 Laura LancasterI put you in the mirror I put in front of me, 2018Acrylic on linen
70 x 50 cm Wooson Gallery Contact Gallery 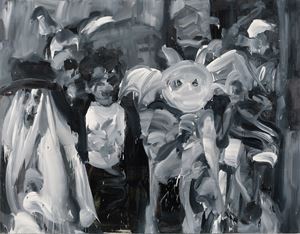 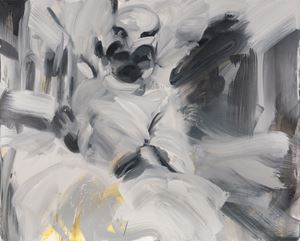 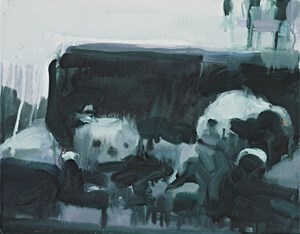 Laura Lancaster (b.1979) has left viewers with a deep impression during her first exhibition held in South Korea in 2014. Her inexorably rendered and extremely skilled brushwork displayed a kind of rare and remarkable sensuality. Now after six years, it is with great pleasure that the Wooson Gallery presents the second solo exhibition of Laura Lancaster, an artist who has fortified the foundation of great European pictorial tradition.

Her images mostly originate from strangers' memories and time periods captured in photos she has accumulated from old family photo albums found in antique markets, magazines, and on the Internet. The strangers in these pictures are put in a group photograph, divorced from the context of their specific situation and time, while figures in different photographs have been recomposed and recreated in a completely new space and time. This series primarily concentrates on capturing moments of our existential lives and is not meant to represent specific people or events. Through the strangers in her paintings, viewers can relive their own happy or heartbroken moments and experience a feeling of being rearranged in dim memories in search of lost time.

She focuses on the interaction between photography and painting in her works: her paintings are mostly inextricably bound up with photographs that form the basis of her paintings. This is suggestive of a more complex relationship instead of a pictorialisation of appropriated photographic images. In other words, photographic images recreated by a master of painting are captured by momentary, fluid brushstrokes on the canvas, almost as if one were clicking the shutter of a camera to capture memories we don't want to miss. Such photographic images found in her paintings serve as a bridge between the past and the present, history and memories, and other and self. Relentlessly and audaciously rendered without hesitation, her paintings are thought to approximate Abstract Expressionism. All the same, she has allowed abstractly portrayed objects to reach the realm of intimate potential, crossing the boundaries between memory and imagination in the blurred sphere of abstraction and figuration.

Potential existence not captured in photographs and paintings has attracted her attention in recent years. Lancaster began depicting a mirror which has long been symbolically used in art history as the interface between self and other in her recent paintings. Her pictorial inquiries made through the medium of a mirror are not limited to only an integration or extension of different spaces and times. The mirror is perhaps an overarching key to comprehensively interpreting her works in the same context with a photograph in that we cannot see ourselves through our own eyes. A Woman Standing before a Dressing Table with a Large Mirror, one of her paintings on show at this exhibition, gives us a chance to grasp why she intentionally drew the concrete motif of a mirror in her work.

The figure in this painting has been reproduced (as in a photograph) by the mirror while the viewer sees both the real back view of the figure in the painting and the front view reproduced and reflected onto a mirror from the real world outside the painting. In other words, the viewer, a third party who is not actually depicted in the painting, is a cardinal potential being who completes the work of art in a position in which he or she can look over and grasp the entire situation. This means that we, the third person who stands before the work, can witness three real worlds: 'reality in a painting,' 'virtual reality in a mirror,' and actual 'real space.'

The mirror's enigmatically mysterious metaphor assumes the role of a weird zoom lens to attract the viewer into her works while adjusting the distance between imagination and reality, moving beyond merely reproducing or reflecting objects. An eyewitness's account of something is always different and plays the role of a zoom lens that keeps a distance between imagination and reality in a picture like a latent mirror.

Born as an identical twin, Lancaster has viewed her older twin sister with intrigue from a distance and observed herself as if looking in a mirror. Her twin sister Rachel Lancaster is known to be just like her, and the two are inseparable: they share a studio together, play in a rock band, and have released a record album.

Just as works by great masters have a simplicity that allows them to show off their skills, Lancaster's not extremely rhetorical (and probably slightly poorish) austere works serenely and grandly emit light, focusing primarily on potentially existing riddles innate in a painting.

Laura Lancaster was born in Hartlepool, England in 1979 and studied painting at Northumbria University. She currently lives and actively works in both Newcastle and London. Chosen by Artfacts as one of the 25 English influential figurative painters alongside David Hockney, Peter Doig, and Glenn Brown, Lancaster has clearly made a place for herself as the youngest artist of the group and a master of English painting.

Sign up to be among the first to know when new exhibitions by Laura Lancaster or at Wooson Gallery open.