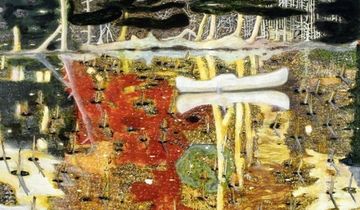 Peter Doig is a Scottish contemporary artist, recognised as one of the most important working landscape painters. His paintings draw on his experiences growing up—especially his time in Canada—and found images such as film stills, newspaper clippings and photographs.

Doig was born in 1959 in Edinburgh, Scotland. Growing up, he moved regularly: first to Trinidad in 1962 and later to Canada in 1966. Doig moved to London in 1979 to study at the Wimbledon School of Art. He also studied at Saint Martins School of Art from 1980 to 1983 and he earned an MA from Chelsea College of Arts in 1990. Doig took up an artist residency in Trinidad in 2000. Since 2002, Peter Doig has lived and worked in Trinidad.

Peter Doig's paintings are inspired by his experiences of moving regularly while growing up. Sitting between landscape and figure painting, his works embody the layered meanings of place; both historical and personal. Doig's work shows his consciousness of art historical precedent. His works draw on, reference and play with the legacies of artists such as Edvard Munch, Claude Monet and Gustav Klimt.

Doig's landscapes are not literal representations. One of his most significant works, The Architect's Home in the Ravine (1991), shows a fictionalised view of architect Eberhard Zeidler's modernist home. The effect is reinforced by layers of rough underpainting and a maddening network of white lines that obscure the home's front view.

Doig creates his images using reference photographs. He aims to relate to photography in the same way that painters did when photography was first invented. However, the paintings he creates are not representative in the same way. His paintings are often loose and have a painterly quality about them.

Doig painted one of his major works, White Canoe (1990—1991), from a photograph. The painting depicts a white canoe and its reflection as a moment of calm in the midst of a turbulent canvas. Doig has stated that he is not interested in the quality of the photograph. In fact, the photograph is merely a starting point from which the painting can develop organically.

In 1991, Peter Doig won the Whitechapel Artist Award. He won first prize in the 1993 John Moores exhibition with Blotter (1993) and in 1994 he was nominated for the Turner Prize. In the same year, he received the Prix Eliette von Karajan. In 2008, he was awarded the Wolfgang Hahn Prize from the Society for Modern Art.

Peter Doig has been the subject of numerous institutional solo exhibitions.

In 2008, the artist had a major solo exhibition at Tate Britain which went on to tour galleries in Europe and the United States. The first major exhibition of Doig's work in his home country, No Foreign Lands, was exhibited at the Scottish National Gallery in Edinburgh in 2013. In 2014, a retrospective of Doig's work was shown at the Fondation Beyeler in Riehen, Switzerland. The retrospective later travelled to Humlebaek, Denmark. In 2015, an exhibition of Doig's work was opened at Fondazione Bevilacqua La Masa in Venice, coinciding with the 56th Venice Biennale.

Peter Doig has had several record-breaking sales at auction. His painting White Canoe (1990—1991), sold in a Sotheby's auction for US$11.3 million in 2007. This set a record for works by living European artists, although it did garner some criticism at the time. Later, in 2009, Doig's Night Playground (1997—1998) sold for £3 million at Christie's London. The Architect's Home in the Ravine (1991) sold for £7.66 million at another Christie's auction in 2013. Doig achieved his highest price at auction in 2017, with the sale of his 1991 painting Rosedale for US$28.8 million to a telephone bidder.

Read More Advisory Pick Peter Doig's 'Swamped' Travels to London Before Its Return to Auction 16 October 2021 Peter Doig's masterpiece Swamped is returning to auction for the third time at Christie's next month.⁠⁠