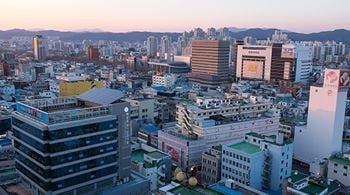 Dubbed the 'Apple City' for its high-quality apples, Daegu is also known to have produced some of Korea's most significant modern and contemporary artists, including Lee In Sung (1912–1950), one of the first artists to introduce Western painting to the region; Suh SeOk (b. 1929), renowned for his large-scale ink paintings often depicting dancing figures; and Kimsooja (b. 1957), whose installation at the 55th Venice Biennale reflected her ongoing interest in bottari (Korean cloth-bundles). Perhaps more importantly, however, the metropolitan city is a burgeoning hub of artistic activities, with museums, galleries, and cultural festivals devoted to encouraging emerging talents at home while partaking in the international art scene.

The city's premier municipal art museum, Daegu Art Museum (DAM), is devoted to bridging the gap between contemporary art and the wider public. With five gallery spaces spread over two floors, the museum regularly organises exhibitions that showcase works by artists born or based in Daegu, alongside solo exhibitions of Korean and international artists such as Alex Katz, Kim Whanki, Yinka Shonibare, and Yayoi Kusama.

Located in the famous Duryu Park, Daegu Arts Center is steadfast in supporting local talents through its exhibitions of both contemporary and traditional practices. Another important public institution, Daegu Art Factory can be found in the heart of the city and also provides the latest examples of contemporary art in diverse media. It is specially dedicated to introducing experimental works by emerging artists through short- and long-term residency programmes.

Southeast of Daegu Art Factory is Bongsan Culture Street—a formerly narrow sector inhabited by small galleries and artisan workshops that later widened its premises for the public in the 1990s. Now filled with murals and year-round exhibitions, it has also been the site of the annual Bongsan Art Festival since 1993. Wooson Gallery—known for its compelling exhibitions of local and international artists such as Tony Cragg and Choi Byung-So—is located in the vicinity, as is GALLERY SOHEON & SOHEON Contemporary, which is more focused on showing modern and contemporary Korean art.

Other galleries within walking distance of the area include Gallery Bundo, a research-based gallery that presents works by emerging and established fine art artists; Leeahn Gallery, which participates in Art Basel Hong Kong and Art Miami, and holds well-received exhibitions at home; and Gallery Shilla, a seasoned gallery that opened in 1992 with an exhibition of works by Yun Hyong-keun, Park Seo-Bo, and Lee Ufan—forerunners of Dansaekhwa—as well as renowned Korean artists Kim Tschang Yeul and Lee Kang-So.

Daegu is the host of Daegu Art Fair, which was established in 2008, and Staires Art Fair, which was inaugurated in June 2019 with the goal of representing more young and local artists and offering a more accessible art fair alternative to the public.