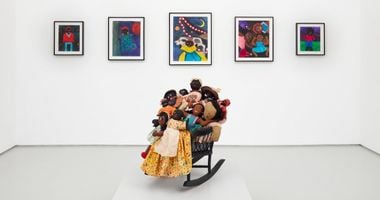 A significant figure in American assemblage, Betye Saar has drawn on spirituality and found objects to produce political and autobiographical works that challenge Black caricature.

Born in Los Angeles, Betye Irene Saar grew up in a highly religious and spiritual middle-class family. As a child, Saar recalled having clairvoyant abilities, often finding herself predicting events like her father missing the tram.

Saar always had a vivid imagination. Fascinated by fairytales, she would often repair and repurpose trinkets and go on 'treasure hunts' with her siblings. Saar would also turn feathers, bottle caps, and buttons into dolls and puppets to gift to family members.

Following her father's passing, Saar moved to the Watts neighbourhood in Los Angeles to live with her grandmother, Irene Hannah Maze, a quilt-maker. The family later moved to Pasadena to live with Saar's maternal great-aunt, a role model in Saar's life who epitomised the dignified Black figure.

While living in Watts, Saar witnessed the construction of the Watts Towers by outsider artist Simon Rodia. The 17 interconnected towers made from cement, broken dishes, seashells, and other found objects convinced Saar that you can truly make art from anything.

Saar attended Pasadena City College for two years until a tuition award for minority students took her to the University of California, Los Angeles, where she completed a B.A. in Design (1947), with the intent of becoming an interior designer.

While attending graduate school classes at the California State University, Long Beach, Saar enrolled in a printmaking class, which prompted her to change course from teaching design, opting rather to retain the freedom of experimentation and pursue a career as an artist.

At the Pasadena Art Museum in 1967, Saar visited an exhibition of Joseph Cornell's repurposed sculptures, which convinced her of the material resonance of found objects. According to Saar, found objects not only had their own lives, but could be used to connect histories.

Cornell's work prompted Saar to make her own assemblages inside boxes and wooden frames, incorporating her own prints and drawings alongside scavenged objects bearing racist imagery, such as dolls and postcards.

The work was in response to Black Boy's Window (1968), for which David Hammons, a member of the Blacks Arts Movement, printed his own body inside a window frame. The mixed-media assemblage of Black Girl's Window marked Saar's departure from print and preluded a lifelong involvement with racial politics.

Beyond racial politics, Saar was also interested in contesting the dominant modes of art making as a woman. In 1970, Saar, Sue Irons, Yvonne Cole Meo, and Suzanne Jackson staged what is considered to be the first African American women's exhibition in California at Jackson's Gallery 32.

In 1973, Saar joined the founding board for Womanspace, a cultural organisation supporting feminist art and community in Los Angeles. In 1974, Saar and fellow artist Samella Lewis held a group exhibition of Black woman artists at Womanspace entitled Black Mirror, which attracted little interest from the white women within the community.

Saar was introduced to African and Oceanic art on a 1970 field trip with Hammons. Made from natural materials, the ritualistic and spiritual qualities of these objects captivated Saar and inspired a deeper engagement with Black history through African objects.

Liberation of Aunt Jemima (1972), arguably Saar's best-known work, is a three-dimensional assemblage that features a racialised 'mammy' figure Saar found at a flea market. The figure is set against a backdrop of advertising for Aunt Jemima-branded pancake syrup and inset in the figure's skirt is an image of a similar figure holding a white baby. With what appears to be cotton at her feet, the central figure holds a broom in one hand and a rifle in the other, turning a derogatory caricature into a symbol of resistance.

Betye Saar has been the recipient of many awards over her lifetime. These include the Wolfgang-Hahn-Preis (2020), the Edward MacDowell Medal (2014), and fellowships from the John Simon Guggenheim Memorial Foundation (1991) and the J. Paul Getty Fund for the Visual Arts (1990). She has also received honorary doctorates from the California Institute of the Arts, the Massachusetts College of Art (both 1995), and the California College of the Arts (1991).

Betye Saar's works have shown in major institutions across the world.

Below you'll find a fun mix of museum and gallery shows, performances, and film screenings taking place over the next few months in the greater Los Angeles area. We know how hard it is to keep track o

Ring in the Year of the Pig with a visit to Eli Klein Gallery’s solo exhibition Shen Fan: Works in Abstraction, 1992–2017 (until 16 February). 'A pioneer in the field, along with his Shanghai-based

Sign up to be notified when new artworks and exhibitions by Betye Saar are added to Ocula.
Sign UpLogin