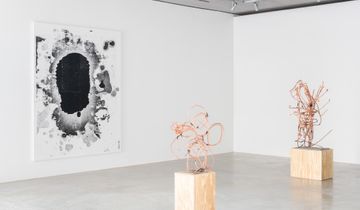 Perhaps best known for his word paintings, American artist Christopher Wool's practice is centred around his continual reformations of painting and abstraction. Combining the aesthetics of graffiti and street culture with the legacies of pop and conceptual art, Wool has employed media and techniques as diverse as incised rollers, stencils, silkscreen printing, photography, replication and overlapping to explore the potential of painting during a time when many deemed it irrelevant.

Wool was born in 1955 in Chicago and moved to New York in 1969, where he studied painting and photography first at Sarah Lawrence College and later at the New York Studio School. Based in Manhattan's Chinatown for 25 years from 1976, Wool became a part of the downtown New York art and music scenes and befriended artists Robert Gober, Richard Prince, James Nares and Jeff Koons, among others. In the 1970s, downtown New York artists were mostly divided between neo-expressionist painting—as seen in the work of Julian Schnabel and Jean-Michel Basquiat—and conceptual and pop-influenced works like those of Cindy Sherman and Prince. Merging influences, Wool borrows from pop art techniques like the use of silkscreen printing, while utilising 1970s conceptualism's incorporation of language.

In 1986, Wool replaced the brush with the paint roller, a shift inspired by the way slumlords in his neighbourhood used the tool to give their properties an impression of having been wallpapered. For one early painting made with a patterned roller, Untitled (1987), Wool printed a vegetal motif in black enamel over a sheet of aluminium. From a distance, the repetitive imagery recalls a mass-produced design; instead of a seamless surface, however, the print is interrupted by smudges and an intentionally uneven distribution of ink. Repurposing a commercial tool for fine art purposes, Wool questioned the kind of traditional material and processes that define painting as a medium. At the same time, Wool's roller paintings somewhat parody the works of colour field painters such as Barnett Newman and Mark Rothko, which were widely criticised as being decorative.

About a year later, Wool began making his iconic stencilled word paintings, conceived when he saw the words 'sex' and 'luv' graffitied on a white delivery van. Like his roller paintings, which lifted content from commercial wallpaper, Wool appropriates language from popular sayings, song lyrics, movies and mass culture for his word paintings. The text 'HELTER' (Untitled [1988]), for instance, comes from the Manson murders ('Helter Skelter' was a term Charles Manson used to refer to a racial apocalyptic war), while 'YOU MAKE ME' (Untitled [1997]) is taken from a Richard Hell album cover. Apocalypse Now (1988), his seminal word painting and one of the few that are titled, derives its name and text—'SELL THE HOUSE SELL THE CAR SELL THE KIDS'—from an American epic war film. Although the notion of treating language as a painting had been previously employed by artists such as John Baldessari, Wool departed from other artists' crisp lettering by using crude stencils to capture the marks of the printing process.

While continuing to create word paintings, Wool has closely worked with silkscreen prints since the 1990s. Often employing floral motifs from wallpapers, he enlarges and overlaps them upon one another to devise dense and abstracted configurations. At times, he spray-guns looping lines of black over them, sometimes wiping the surface with rags to allude to the act of vandalism in the streets. It was also in the 1990s that Wool began creating silkscreens of his finished paintings by photographing them and printing them on canvas. For Wool, appropriating his own work is not only a way of revising his practice, but also of exploring a method of generating new paintings.

Alongside his paintings, Wool has produced a number of photographic works over the course of his career. One of his most famous and earliest photos was a result of his collaboration with Robert Gober. The photograph shows a dress—sewn by Gober and printed by Wool—hanging on a tree. The untitled black-and-white image was exhibited in A Project: Robert Gober/Christopher Wool (1988), a joint exhibition co-curated by 303 Gallery, Paula Cooper Gallery, Luhring Augustine and Hodes Gallery in New York. In the 1990s, Wool started to incorporate photographs into his artworks and to generate discrete series, of which the 'East Broadway Breakdown' (1994–1995/2002) is arguably the most famous. With a 35mm camera, the artist captured the desolate landscapes of downtown New York City in the quiet night hours devoid of human presence, focusing on aspects such as graffiti, garbage and stray dogs.

Wool has more recently extended his abstraction into the third dimension. In 2012, he designed a set of stained-glass windows for the 11th-century Chapelle capitulaire du Prieuré de la Charité-sur-Loire, France, for which he conceived a composition of looping lines with highlights in yellow. Whereas lead is used in traditional glassmaking to support and divide glass parts, Wool adopted it to reproduce the tangled strokes of his drawing. An untitled sculpture from his exhibition A New Sculpture (2018) at New York's Luhring Augustine echoes the abstracted lines of his stained-glass windows, in which bronze and copper plate steel cords are intricately entwined.

The supersized gallery will open in June with an exhibition by Christopher Wool.

Expo Chicago, that city’s annual contemporary art fair, announced the list of participants for its 2016 editions of In/Situ, In/Situ Outside, and Expo Projects. These sectors of the fair feature large-scale installations, and will be placed both at the fair and around Chicago. Expo Chicago opens September 22.

All true art lovers, collectors, dealers and contemporary art market actors know quite well that there is always amazing exhibitions of well-known contemporary artists at London-based Inigo Philbrick. We could only mention one exhibition from 2015 – the show entitled Spray, Memory featuring works by Sterling Ruby and Mike Kelley. Inigo...

For weeks I’d been telling myself, and anyone who would listen, that I was going to skip the 2014 edition of Art Basel Miami Beach. It had been a busy fall. October’s Frieze London fair is at least on my home turf, but then there were whirlwind trips to Paris, for FIAC, and New York, for the auctions. I couldn’t be bothered with...

Be among the first to know when new artworks and exhibitions by Christopher Wool are added to Ocula.
Sign Up Login