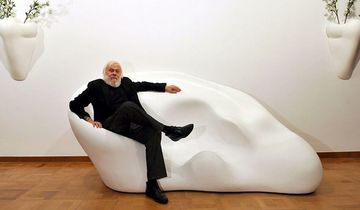 John Baldessari was an artist's artist. He is celebrated as one of the most influential artists of his generation, both as a pioneer in conceptual art and as a teacher for more than three decades. In addition to his language-based paintings and performances of the late 1960s and 1970s, now considered milestones in conceptual art, Baldessari is also known for his use of colourful dot-shaped adhesives to conceal faces in photographs. As an artist who often expanded his repertoire through painting, printmaking, sculpture, photomontage, video, film, and books, Baldessari's work is characterised by humour, wit, and an air of insouciance towards tradition.

Baldessari began his career as a painter, working with oils in the abstract expressionist manner that was dominant in America at the time. Many of his early paintings, however, do not survive, because in 1970 he burned the artworks made between 1953 and 1966 in a crematorium. Baldessari conceived the incineration as an artwork in itself, documenting and titling it Cremation Project. After the burning, the artist commemorated the destroyed paintings by having their birth and death dates inscribed on bronze plaques, and baking cookies with their ashes. Cremation Project signalled both his break with abstract expressionism and his increasing experimentation with conceptual art.

Throughout his career, Baldessari questioned the role of the artist and the meaning of authorship by diminishing authorship and challenging traditional boundaries in art-making. In the late 1960s, he occasionally hired professional sign painters to paint for him, notably Pure Beauty (1966–8), a simple white canvas with its title written across it in black capital letters. Such sign paintings not only emphasise the importance of concept over the artist's touch, but also disconcert the definition of a painting as composed of images by creating paintings composed of signs. In another iconic work, I Will Not Make Any More Boring Art (1971), Baldessari asked students at the Nova Scotia College of Art and Design in Halifax, Canada, to write the sentence 'I will not make any more boring art' on the gallery walls of his exhibition. The well-known performance emerged from his lack of finances to travel to Nova Scotia, where the artist had been asked to exhibit. Baldessari, who had been deeply dissatisfied with the limitations of traditional painting, conceived to cover the space that conventionally hangs paintings with sentences in a repeated manner that resembles a punishment. At the same time, however, the artist intended the punishment-performance to be instructive for young students, encouraging them to rebel against tradition.

In the 1980s, Baldessari began using stills from B movies or noir films to create fragmented and ambiguous narratives. For example, the collage Kiss/Panic (1984) consists of ten images of hands holding guns that frame an extreme close-up of a kiss and a scene with a gathering. The guns point away from the central images as if to protect or threaten moments of intimacy by holding them hostage. During this period, Baldessari also began to block out faces, bodies and other parts of photographs with paint, later utilising his famous dots to cover faces as a way of withholding important visual information from the viewer. Confronted with the concealed spaces, the spectator becomes an active participant, using their imagination to complete the missing parts.

Text and image are central to Baldessari's practice, in which unrelated components are paired to stimulate the viewer's participation in the construction of meaning. OFFICE BUILDING—DAY MAYO Is there a Courbet for sale here? (2017), for instance, depicts the emoji of a green gecko, multiplied in size and printed on canvas, above the question in its title. By juxtaposing elements with no apparent relationship, Baldessari encourages the viewer to search for possible links between them—making associations and speculations, actively constructing meaning in the process. His 'Movie Scripts / Art' series (2014), which pairs excerpts from film scripts with details of art historical images, achieve a similar effect.

Baldessari's sense of humour translates to his often larger-than-life sculptures of flora and fauna. He created his first sculpture in 2007, while working with publisher Beyer Projects; Beethoven's Trumpet (With Ear) takes the form of a six-foot-high wall-mounted ear in white, from which a bronze-plated trumpet protrudes. As noted in 'John Baldessari's Enduring Presence', published by Ocula Magazine in 2020, the artist's versatile sculptural practice includes Camel (Albino) Contemplating Needle (Large) (2013) and the gigantic Pineapple (2019). Baldessari also paid homage to the sculptor Alberto Giacometti with his Giacometti Variations (2010), created for a solo exhibition at Fondazione Prada in Milan, that consists of nine Giacometti-inspired bronze figures accompanied with brightly-coloured hula hoops, a pile of books, or a large shoe.

Baldessari studied art and literature at San Diego State University, where he received his MA in art history in 1957, and completed further post-graduate work at Otis Art Institute, Chouinard Art Institute and the University of California, Berkeley. Since first teaching art in his native National City in 1959, he taught for more than three decades at junior colleges, community colleges, and universities. Between 1970 and 1988, he held his celebrated Post-Studio Art classes at CalArts, which encouraged young artists to experiment outside traditional painting and sculpture. Among his first students were Barbara Bloom, Troy Brauntuch, Matt Mullican, David Salle, and James Welling, who are now some of the most prominent artists of their generation. Baldessari returned to teaching in 1996 at the University of California, Los Angeles, and continued to teach until 2007, further contributing to contemporary art by influencing a younger generation of artists.

Baldessari's work has been exhibited extensively in the US and Europe; the artist's biography on his website reveals that he held more than 200 solo exhibitions and over 1000 group exhibitions during his lifetime. Selected solo exhibitions include Learning to Read with John Baldessari at Museo Jumex, Mexico City (2017); John Baldessari, the inaugural show of Sprüth Magers in Los Angeles (2016); and John Baldessari: Pure Beauty (2009), a major retrospective organised by Tate Modern that travelled to Museu d'Art Contemporani de Barcelona, Los Angeles County Museum of Art and New York's Metropolitan Museum of Art in 2010. In 2009, Baldessari was awarded the Golden Lion for Lifetime Achievement at the 53rd Venice Biennale.

Ocula Insight Lawrence Weiner’s Cross-Generational Tribute in L.A. Distills to a ‘Portrait’ By Nicholas Nauman, Los Angeles The late artist's tribute exhibition includes works by his contemporaries and the generations he influenced.

Read More Ocula Feature Message in a bubble: Art Basel in Miami Beach 2016 By Stephanie Bailey, Miami Speculation for the lack of buzz became a common talking point. Was it because of Trump? Zika? Fatigue?

Read More Ocula Conversation Bob Rennie By Anna Dickie, Hong Kong The works in the collection and in the 'Chaos' show reflect the actual reality of the world. I just felt that given what's going on right now, we needed to do a show like this.